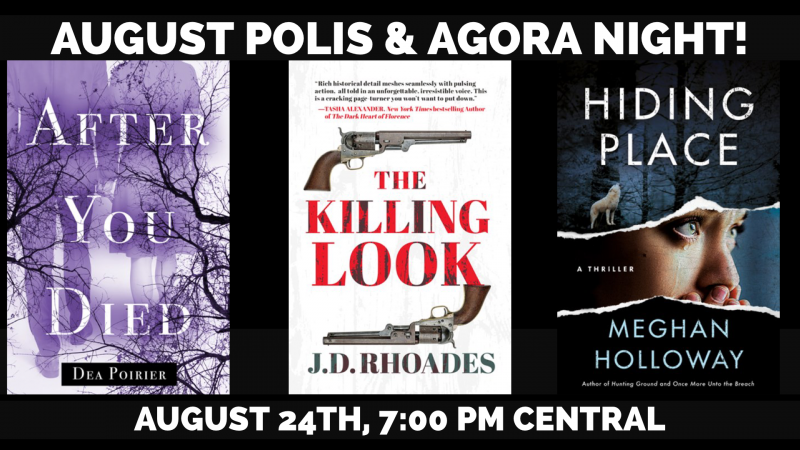 Dea (D.H) Poirier is the international bestselling author of The Calderwood Cases series, including NEXT GIRL TO DIE, which sold over 50,000 copies within the first year of publication, and BENEATH THE ASHES. She was raised in Edmond, Oklahoma, where she got her start writing in creative writing courses. She attended The University of Central Oklahoma for Computer Science and Political Science. Later, she spent time living on both coasts, and traveling the United States, before finally putting down roots in Central Florida. She now resides somewhere between Disney and the swamp. She spends her days at her day job as a Vice President of Digital Marketing, and her nights writing. Find her online at dhpoirier.com and on Twitter @deapoirierbooks

Meghan Holloway found her first Nancy Drew mystery in a sun-dappled attic at the age of eight and subsequently fell in love with the grip and tautness of a well-told mystery. She flew an airplane before she learned how to drive a car, did her undergrad work in Creative Writing in the sweltering south, and finished a Masters of Library and Information Science in the blustery north. She spent a summer and fall in Maine picking peaches and apples, traveled the world for a few years, and did a stint fighting crime in the records section of a police department. She now lives in the foothills of the Appalachians with her standard poodle and spends her days as a scientist with the requisite glasses but minus the lab coat. She is the author of HIDING PLACE, HUNTING GROUND, and ONCE MORE UNTO THE BREACH, all available from Polis Books. Follow her at @AMeghanHolloway.

Born and raised in North Carolina, J.D. Rhoades has worked as a radio news reporter, club DJ, television cameraman, ad salesman, waiter, attorney, and newspaper columnist. His weekly column in North Carolina's The Pilot was twice named best column of the year in its division. He is the author of six novels in his acclaimed Jack Keller series: The Devil's Right Hand, Good Day in Hell, Safe and Sound, Devils and Dust, Hellhound on My Trail, and Won't Back Down, as well as Ice Chest, Breaking Cover, and Broken Shield. He lives, writes, and practices law in Carthage, NC.

After You Died (Afterlife #1) (Paperback)

NAMED ONE OF CRIMEREADS' MOST ANTICIPATED CRIME BOOKS OF 2021

Seventeen-year-old bisexual teen boy Asher remembers nothing from the night in 1968 that the police found him covered in his girlfriend's blood. He knows he'd never hurt anyone, least of all her. But the only person who believes him is his twin sister. He's sentenced to five years at the Dozier Reform School.

Hector Lewis is obsessed with uncovering the truth of what happened to his wife and daughter fifteen years ago. The man he believed responsible for their disappearance is dead, and the trail has once again grown cold. Until he finds a long-hidden message from the past.

Civil War veteran L.D. Cade arrives in 1870s San Francisco, seeking his fortune and a place to end his restless wandering. A job as bodyguard to a flashy real estate speculator seems like just the opportunity he's been looking for. But beneath the glitter and glamour of Gilded Age San Francisco lie festering greed, corruption, and intolerance.