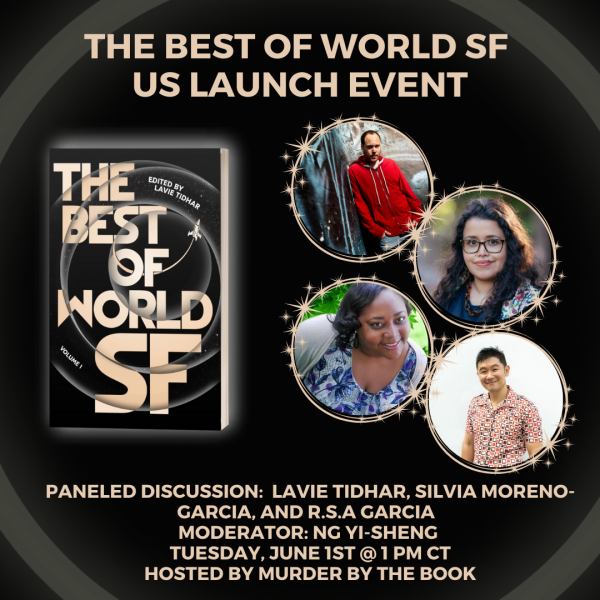 In celebration of the launch of THE BEST OF WORLD SF, editor Lavie Tidhar and contributors Silvia Moreno-Garcia, R.S.A Garcia, and Ng Yi-Sheng will discuss international sff.

Ng Yi-Sheng is a Singaporean LGBT+ activist, writer and researcher with a special focus on Southeast Asian history and folklore. His books include the speculative fiction collection Lion City (winners of the Singapore Literature Prize 2020) and SQ21: Singapore Queers in the 21st Century. He has also edited publications such as Sanctuary: Short Fiction from Queer Asia, EXHALE: an Anthology of Queer Singapore Voices and A Mosque in the Jungle: Classic Ghost Stories by Othman Wok. He tweets and Instagrams at @yishkabob.

R.S.A. Garcia lives in Trinidad and Tobago with an extended family and too many dogs. Her debut science fiction mystery novel, Lex Talionis, received a starred review from Publishers Weekly and the Silver Medal for Best Scifi/Fantasy/Horror Ebook from the Independent Publishers Awards (IPPY 2015). She has also published short fiction in international magazines, including Clarkesworld, Abyss and Apex, Internazionale Magazine (Italy), and in several anthologies. Learn more about her work at rsagarcia.com.

Silvia Moreno-Garcia is the bestselling author of the novels Mexican Gothic, Gods of Jade and Shadow, Certain Dark Things, Untamed Shore, and a bunch of other books. She has also edited several anthologies, including the World Fantasy Award-winning She Walks in Shadows (a.k.a. Cthulhu’s Daughters).

Lavie Tidhar is the World Fantasy Award-winning author of Osama (2011), The Violent Century (2013), the Jerwood Fiction Uncovered Prize-winning A Man Lies Dreaming (2014), and the Campbell Award-winning Central Station (2016), in addition to many other works and several other awards. He works across genres, combining detective and thriller modes with poetry, science fiction and historical and autobiographical material. His work has been compared to that of Philip K. Dick by The Guardian and the Financial Times, and to Kurt Vonnegut's by Locus.

Twenty-six new short stories representing the state of the art in international science fiction. 'Rare and wonderful' The Times The future is coming. It knows no bounds, and neither should science fiction. They say the more things change the more they stay the same. But over the last hundred years, science fiction has changed.