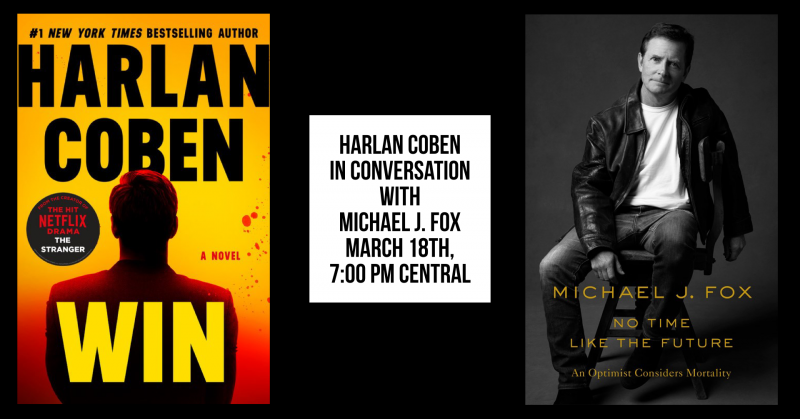 This is a ticketed event, however it couldn't be easier to get a ticket - just purchase a copy of Win from Murder By The Book!

If you've purchased a copy of Win from us, you will be emailed a Zoom link and password on Tuesday, March 16th so that you can view and participate in the event.

A portion of the proceeds from the book sales from the event will be donated to The Michael J. Fox Foundation for Parkinson's Research.

Harlan Coben is a #1 New York Times bestselling author and one of the world's leading storytellers. His suspense novels are published in forty-five languages and have been number one bestsellers in more than a dozen countries, with seventy-five million books in print worldwide. His Myron Bolitar series has earned the Edgar, Shamus, and Anthony Awards, and many of his books have been developed into Netflix series, including his adaptation of The Stranger, headlined by Richard Armitage, and The Woods. He lives in New Jersey.

Today Michael is as famous for his advocacy as for his acting. Sitting on the Foundation's Board of Directors and serving as its inspirational leader, Michael travels and speaks frequently on behalf of the organization described by the New York Times as "the most credible voice on Parkinson's research in the world." He is admired for his commitment to raising awareness about Parkinson's disease research, his dedication to scientific freedom, and his appreciation of the need for new strategies to accelerate the translation of research discoveries into practical therapies on pharmacy shelves.

Drawing on his natural optimism and determination, Michael returned to full-time acting in 2013 with his role as Mike Henry in NBC's "The Michael J. Fox Show," a sitcom about a man living an ordinary life with Parkinson's. Fox also continues to thrill fans in his multi-episode guest arc as Lewis Canning, a devious attorney who uses his tardive dyskinesia to his clients' advantage, in the CBS hit drama "The Good Wife" starring Julianna Margulies.

Michael has spoken and written extensively about the inspiration he finds in the creativity, passion and commitment of the Parkinson's community. "When the cure is found — and it will be — it won't be because of any single individual or because of our Foundation," he says. "It will be because of all of us, working together."

In this #1 New York Times bestselling thriller from Harlan Coben, a dead man's secrets fall into the hands of a vigilante antihero—drawing him down a dangerous road.

Over twenty years ago, the heiress Patricia Lockwood was abducted during a robbery of her family's estate, then locked inside an isolated cabin for months.

No Time Like the Future: An Optimist Considers Mortality (Hardcover)

A moving account of resilience, hope, fear and mortality, and how these things resonate in our lives, by actor and advocate Michael J. Fox.