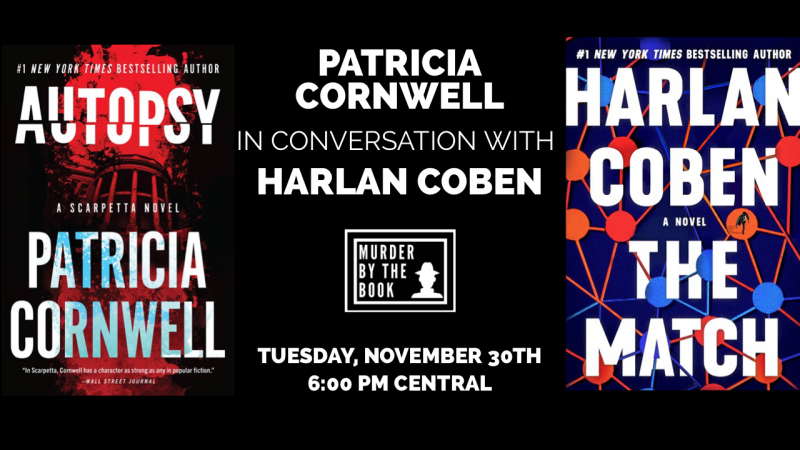 This event will be a prerecorded discussion, but if you have a question for Patricia Cornwell please leave your question in the order comments and we'll pass them along. Please submit your questions by November 12th.

Patricia Cornwell is recognized as one of the world's top bestselling crime authors with novels translated into thirty-six languages in more than 120 countries. Her novels have won numerous prestigious awards including the Edgar, the Creasey, the Anthony, the Macavity, and the Prix du Roman d'Aventure. Beyond the Scarpetta series, Patricia has written a definitive book about Jack the Ripper, a biography, and three more fiction series among others. Cornwell, a licensed helicopter pilot and scuba diver, actively researches the forensic technologies that inform her work. She was born in Miami, grew up in Montreat, North Carolina, and now lives and works in Boston.

Harlan Coben is a #1 New York Times bestselling author and one of the world's leading storytellers. His suspense novels are published in forty-five languages and have been number one bestsellers in more than a dozen countries, with seventy-five million books in print worldwide. His Myron Bolitar series has earned the Edgar, Shamus, and Anthony Awards, and many of his books have been developed into Netflix series, including his adaptation of The Stranger, headlined by Richard Armitage, and The Woods. He lives in New Jersey.

From the modern master of suspense comes a gripping new thriller in which Wilde follows a tip that may finally reveal the truth behind his abandonment . . .

In this #1 New York Times bestselling thriller from Harlan Coben, a dead man's secrets fall into the hands of a vigilante antihero—drawing him down a dangerous road.

Over twenty years ago, the heiress Patricia Lockwood was abducted during a robbery of her family's estate, then locked inside an isolated cabin for months.