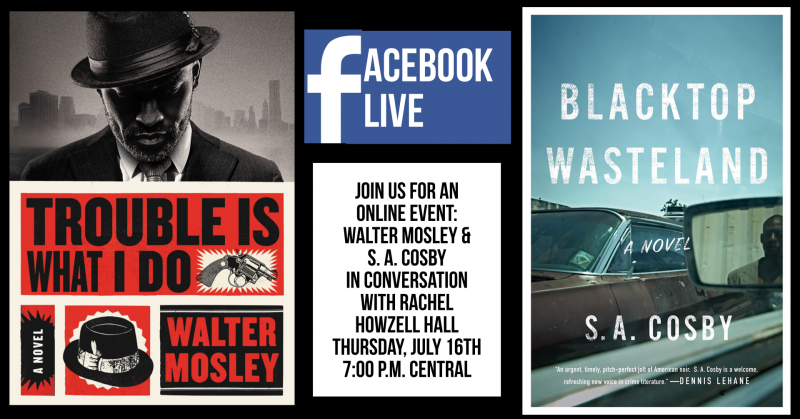 Walter Mosley is one of the most versatile and admired writers in America today. He is the author of more than 43 critically acclaimed books, including the major bestselling mystery series featuring Easy Rawlins. His work has been translated into 23 languages and includes literary fiction, science fiction, political monographs, and a young adult novel. His short fiction has been widely published, and his nonfiction has appeared in The New York Times Magazine and The Nation, among other publications. He is the winner of numerous awards, including an O. Henry Award, a Grammy and PEN America’s Lifetime Achievement Award. He lives in New York City.

S..A. Cosby is an Anthony award winning writer from Southeastern Virginia. His short fiction has appeared in numerous anthologies and magazines His story "Slant-Six" was selected as a Distinguished Story in Best American MysteryStories for 2016. His short story "The Grass Beneath My Feet" won the Anthony award for best short story in 2019. His writing has been called " gritty and heartbreaking " and " dark, thrilling and tragic ". His style and tone is influenced by his varied life experiences which includes but are not limited to being a bouncer, construction worker, retail manager and for six hours a mascot for a major fast food chain inside the world's hottest costume. When he isn't crafting tales of murder and mayhem he assists the dedicated staff at J.K.Redmind Funeral home as a mortician's assistant. He is also known as one hell of a chess player...
Actually its checkers, he's good at checkers.

Rachel Howzell Hall is a writer/assistant development director at City of Hope, a national leader in cancer research and treatment. Her first novel, A Quiet Storm, was a featured selection of Borders' Original Voices program, as well as an alternate selection of the Black Expressions book club. She lives in Los Angeles.

A husband, a father, a son, a business owner…And the best getaway driver east of the Mississippi.

“Sensationally good—new, fresh, real, authentic, twisty, with characters and dilemmas that will break your heart. More than recommended.” —Lee Child

Trouble Is What I Do (Leonid McGill) (Hardcover)

Morally ambiguous P.I. Leonid McGill is back -- and investigating crimes against society's most downtrodden -- in this installment of the beloved detective series from an Edgar Award-winning and bestselling crime novelist.

They All Fall Down: A Thriller (Mass Market)

They All Fall Down: A Thriller (Hardcover)