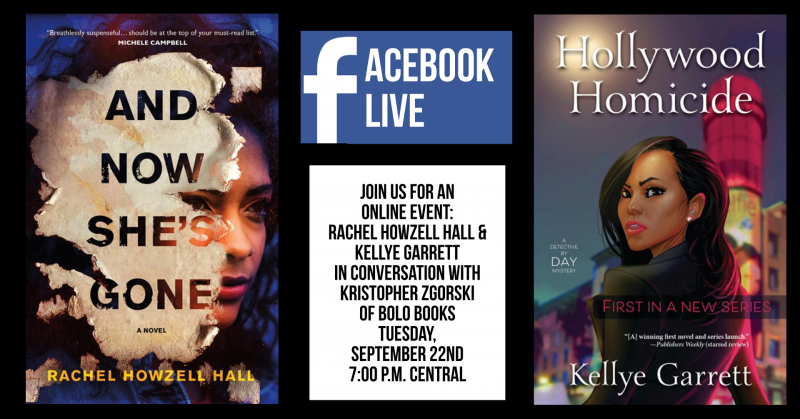 RACHEL HOWZELL HALL is the author of eight novels, including They All Fall Down and The Good Sister, co-written with James Patterson in the New York Times bestselling anthology The Family
Lawyer. Rachel is also the author of the critically-acclaimed Detective Elouise Norton series and the upcoming suspense novel AND NOW SHE’S GONE (September 2020). The third in series, Trail of Echoes, received a coveted Kirkus Star and was one of Kirkus Reviews "Books That Kept Us Up All Night"; Land of Shadows and Skies of Ash were included on the Los Angeles Times’ “Books to Read This Summer”, and the New York Times called Lou Norton “a formidable fighter—someone you want on your side.” Lou was also included in The Guardian’s Top 10 Female Detectives in Fiction. Rachel is a member of the board of directors of Mystery Writers of
America and a former mentor for AWP’s Mentor to Mentor program. She is a native of Los Angeles.

A featured writer on NPR’s acclaimed ‘Crime in the City’ series and the National Endowment for the Arts weekly podcast, Rachel has also served as a mentor in AWP’s Writer to Writer Program and is currently on the board of directors of the Mystery Writers of America. She was named one of Apple iBooks 10 Authors to Read in 2017. She lives in Los Angeles with her husband and daughter.

KELLYE GARRETT (East Orange, NJ) spent eight years working in Hollywood, including a stint writing for Cold Case. The first book in her Detective by Day Mystery series, Hollywood Homicide, won the Agatha, Lefty and Independent Publisher "IPPY" awards for best first novel. A former magazine editor, she holds a BS in magazine writing from Florida A&M and an MFA in screenwriting from USC's famed film school. She now works for a leading media company and brainstorms ways to commit murder for her novels.

KRISTOPHER ZGORSKI and BOLO Books was awarded the RAVEN AWARD from the Mystery Writers of America in 2018.

“Sharp, witty and perfectly paced, And Now She’s Gone is one hell of a read!” —Wendy Walker, bestselling author of The Night Before

But is she missing?

They All Fall Down: A Thriller (Mass Market)

Winner of the 2018 Anthony Award for Best First Novel

Winner of the 2017 Agatha Award for Best First Novel

Also a Lefty Award Winner and a Barry Award-Nominated Title

The Surprise Hit of the Season

And the award goes to...

...Dayna Anderson, the semi-famous actress turned PI who steps up her sleuthing swagger in this follow-up to breakout hit Hollywood Homicide, winner of the Lefty Award and the Agatha Award for Best First Novel