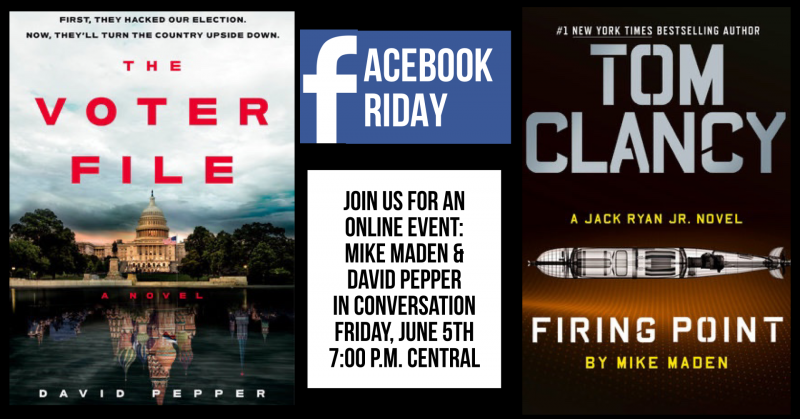 Mike Maden is the author of the critically acclaimed Drone series and two novels in Tom Clancy’s #1 New York Times bestselling Jack Ryan Jr. series. He holds both a master’s and Ph.D. in political science from the University of California at Davis, specializing in international relations and comparative politics. He has lectured and consulted on the topics of war and the Middle East, among others. Maden has served as a political consultant and campaign manager in state and national elections, and hosted his own local weekly radio show for a year.

David Pepper is the author of the Jack Sharpe series, including The Voter File, The Wingman, and The People's House. He earned his B.A. from Yale University and his J.D. from Yale Law School. He has clerked for a judge on the United States Court of Appeals, served in local elected office in Ohio, worked for major law firms, and taught election and voting rights law. Prior to law school, Pepper worked in St. Petersburg, Russia, for the Washington-based Center for Strategic and International Studies. In 2015, he was unanimously elected Chairman of the Democratic Party of Ohio.

"Pepper comes through again with this clever tale of how cyber sabotage of elections, coupled with highly concentrated ownership of traditional media operations, can undermine American democracy."--President Bill Clinton

Jack Ryan, Jr. is out to avenge the murder of an old friend, but the vein of evil he's tapped into may run too deep for him to handle in the latest electric entry in the #1 New York Times bestselling series.

Jack Ryan, Jr.’s race to stop an international criminal conspiracy is intertwined with the fate of an old friend in this blistering entry in the #1 New York Times bestselling series.