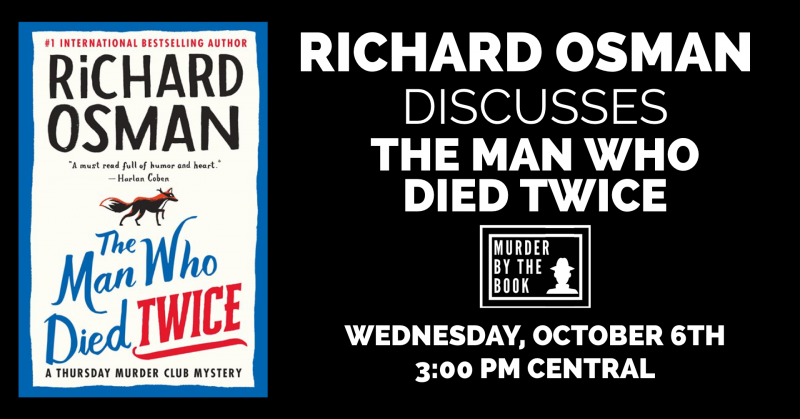 Signed copies of The Man Who Died Twice available for preorder!

Join us as Jeffrey Deaver chats with Richard Osman about The Man Who Died Twice!

Richard Osman is an author, producer, and television presenter. His first novel, The Thursday Murder Club, was a #1 million-copy international bestseller. Critics have already described The Man Who Died Twice as "his second novel." He lives in London.

Jeffery Deaver is the #1 international bestselling and award-winning author of more than forty novels, three collections of short stories, and a nonfiction law book. His books are sold in 150 countries and translated into twenty-five languages. A former journalist, folksinger, and attorney, he was born outside of Chicago and has a bachelor of journalism degree from the University of Missouri and a law degree from Fordham University.

This is a ticketed event, however it couldn't be easier to get a ticket - just purchase a copy of The Man Who Died Twice from Murder By The Book!

If you've purchased a copy of The Man Who Died Twice from us, you will be emailed a Crowdcast link so that you can view and participate in the event.

The "master of ticking-bomb suspense" (People) Jeffery Deaver delivers the latest thriller featuring his beloved protagonists Lincoln Rhyme and Amelia Sachs as they search for a criminal whose fascination with breaking locks terrorizes New York City.