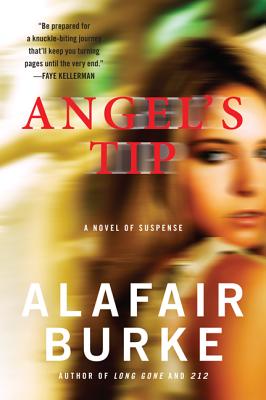 This is book number 2 in the Ellie Hatcher series.

“Angel’s Tip is a riveting read that snaps with the beat of New York….A knuckle-biting journey that’ll keep you turning pages until the very end.”
—Faye Kellerman, bestselling author of the Peter Decker and Rina Lazarus novels

“Alafair Burke has created a winning heroine in Ellie Hatcher, someone to root for.”
—Tami Hoag, bestselling author of Down the Darkest Road

Acclaimed thriller writer Alafair Burke delves into the underworld of the Manhattan nightclub scene in Angel’s Tip. Burke is the daughter of crime fiction superstar James Lee Burke, creator of Cajun detective Dave Robicheaux, prompting the Fort Worth Star-Telegram to proclaim that “this fast-paced-but-human thriller proves that writing talent is genetic.” A superb crime novel featuring NYPD Detective Ellie Hatcher (“a strong female protagonist in the tradition of Sara Paretsky’s V.I. Warshawski and Marcia Muller’s Sharon McCone” —Boston Globe), Angel’s Tip follows Ellie’s investigation into the murder of a young college student, quite possibly by a member of New York’s young moneyed elite, and fans of Lisa Gardner, Karin Slaughter, Harlan Coben, and Sue Grafton will most definitely want to trail along.

“Addictive. …Holds the readers attention from first word to last, and begs for a sequel.”
— Kirkus Reviews on Dead Connection

“Angel’s Tip is a riveting read that snaps with the beat of New York. Be prepared for a knuckle-biting journey that’ll keep you turning pages until the very end.”
— Faye Kellerman

“Alafair Burke has created a winning heroine in Ellie Hatcher, someone to root for not only in this book, but I hope in many more tales as yet untold.”
— Tami Hoag

“Alafair Burke is one of those rare writers whose books are both scary and cerebral. Complex plotting, multi-layered characters, a creepy serial killer - in Angel’s Tip, Burke has once again proven herself a terrific storyteller.”
— Sandra Brown

“[Burke] scores on all counts in this thriller about a serial killer with a hair fetish.... [Her] brisk and ultimately suspenseful narrative offers wily and intricate plotting and sharply etched major and minor characters.”
— Kirkus Reviews (Starred Review)