If You Were Here: A Novel of Suspense (Paperback) 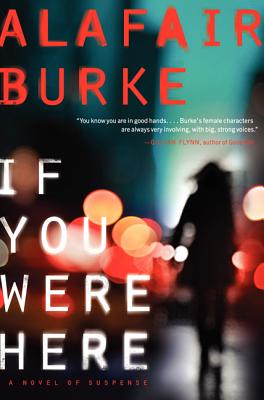 “If You Were Here is the story of a New York City prosecutor long fallen from grace, now working as a news reporter. McKenna Jordan unexpectedly stumbles across a recent photo of a close friend who disappeared nearly 10 years ago. Nothing is as it seems, not even the case that cost McKenna her career. Clever plot twists kept my nose buried until the very last page. Highly recommended for fans of Harlan Coben and Lisa Unger.”
— Bina Valenzano, The BookMark Shoppe, Brooklyn, NY

If You Were Here is a thrilling novel of suspense from Alafair Burke, the author Dennis Lehane calls “one of the finest young crime writers working today.”

Manhattan journalist McKenna Jordan is chasing the story of an unidentified woman who heroically pulled a teenaged boy from the subway tracks. When she locates a video that captures part of the incident, she thinks she has an edge on the competition scrambling to identify the mystery heroine, but is shocked to discover that the woman in the video bears a strong resemblance to Susan Hauptmann, a close friend who disappeared without a trace a decade earlier.

“You know you are in good hands with her, and can relax without wondering if things are going to fall apart midway through. ...Burke’s female characters are always very involving, with big, strong voices.”
— Gillian Flynn, author of Gone Girl, in O, the Oprah Magazine

“Outstanding….Burke’s accuracy in legal and judicial technicalities is impressive although most readers will find simpler pleasures in her sharp writing, well-constructed plot, and dimensional characters.”
— Publishers Weekly (starred review)

“If You Were Here is a winner: a suspenseful, tightly plotted story of friendship, lies, and betrayal. Alafair Burke writes deftly about secrets buried close to home. An accomplished novel by an assured author.”
— Meg Gardiner, author of The Shadow Tracer

“After finishing If You Were Here, I don’t feel I can trust anyone ever again, except Alafair Burke to provide a cracking good read.”
— Linwood Barclay, author of Trust Your Eyes

“Delivers a cleverly nuanced plot that will keep the pages turning. [Burke’s] smart writing is fast-paced and engaging, and this book should appeal to most mystery readers, especially those looking for compelling, intelligent story lines. . . .. a delight.”
— Library Journal

“The plot complexity of this richly populated book keeps the action pumping, but it is the delicate shifts in perception that intrigue…keeps readers edgily engaged.”
— Houston Chronicle

“Exciting....Lawyer turned-journalist McKenna finds her life turned upside down when she recognizes a friend from her college years who disappeared without a trace a decade before on a video of a near-tragedy on the subway….Will engage [Burke’s] growing audience.”
— Booklist

“One of the more-talented crime writers working today.”
— Pittsburgh Tribune

“Burke’s first class adventure has murder and mayhem wrapped up in an intricate, innovative plot. Gripping from the first page....Will keep readers guessing until the end.”
— RT Book Reviews, 4 1/2 stars

“Nicely crafted, plenty of suspense to go around, a couple of unanticipated twists - what’s not to like?”
— BookPage

“If You Were Here veers from one realistic twist to another with aplomb. Years of betrayal, lies and distrust rise to the surface as the suspenseful plot never falters.… Outstanding.”
— Sacramento Bee