All Day and a Night: A Novel of Suspense (Ellie Hatcher #5) (Large Print / Paperback) 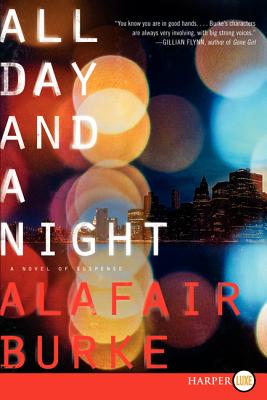 This is book number 5 in the Ellie Hatcher series.

A new murder case with ties to a convicted serial killer leads Detective Ellie Hatcher into a twisting investigation with explosive and deadly results in this superb mystery from the “terrific web spinner” (Entertainment Weekly) Alafair Burke.

When psychotherapist Helen Brunswick is murdered in her Park Slope office, the entire city suspects her estranged husband—until the District Attorney’s office receives an anonymous letter. The letter’s author knows a chilling detail that police have kept secret: the victim’s bones were broken after she was killed. Her injuries were eerily similar to the signature used twenty years earlier by Anthony Amaro, a serial killer serving a life sentence for his crimes. Now, Amaro is asking to be released from prison, arguing that he was wrongly convicted, and that the true killer is still on the loose.

NYPD Detectives Ellie Hatcher and JJ Rogan are tapped as the “fresh look” team to reassess the original investigation that led to Amaro’s conviction. The case pits them against both their fellow officers and a hard-charging celebrity defense lawyer with a young associate named Carrie Blank, whose older sister was one of Amaro’s victims.

As the NYPD and Amaro’s lawyers search for certainty among conflicting evidence, their investigations take them back to Carrie’s hometown, where secrets buried long ago lead to a brutal attack—one that makes it terrifyingly clear that someone has gotten too close to the truth.

“The strength of the novel is its complexity: The characters are variegated, textured, operating out of a range of motivations, personal and otherwise.”
— Los Angeles Times

“If it was me on the slab at the coroner’s office I would want Ellie Hatcher on the case. Burke’s detective is one of the best in the business and this take on New York City could only come from a writer who knows its darkness and light so well.”
— Michael Connelly, author of The Burning Room

“Burke at her finest: razor sharp twists, stunning surprises and artfully drawn characters. The insider’s view of criminal prosecution is masterfully wrought and as usual, Burke makes you feel like you’re riding along with the detectives in the back of their unmarked car. You won’t want to miss this one.”
— Karin Slaughter, author of Unseen

“Compelling….Burke’s talent as a writer continues to grow along with Ellie’s character. Although this is the fifth book in the Ellie Hatcher series, there isn’t a better starting point than All Day and a Night, which will keep the reader up all night.”
— Associated Press

“This is a book that you cannot and will not be able to be put down. An intricate puzzle, this mystery is so well written that the culprit is impossible to figure out. A definite keeper!”
— Suspense magazine

“Spring loaded and razor sharp, All Day and a Night is a surprising and compelling thriller. But Alafair Burke has given us something more gripping than just a crime novel. Her story is about women, their drive, their compassion, and their public and private battles for success and acceptance.”
— Ivy Pochoda, author of Visitation Street

“Alafair Burke is as good as any living writer at capturing what crime is like in New York City.”
— Pittsburgh Tribune

“A masterfully plotted, psychologically complex thriller, Alafair Burke’s All Day and a Night raises larger questions about the choices we make, the mistakes we can’t undo. Whip-smart and emotionally deft, it delivers all the way through its final pages.”
— Megan Abbott, author of Dare Me

“A satisfying police procedural with added interest from alternating perspectives of detective and attorney. For fans of Lisa Gardner and Tess Gerritsen, and readers who enjoy tough female police officer protagonists and complex plots.”
— Library Journal