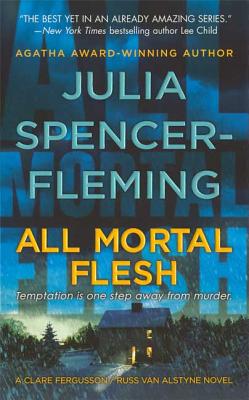 This is book number 5 in the Fergusson/Van Alstyne Mysteries series.

Police Chief Russ Van Alstyne's first encounter with Clare Fergusson was in an emergency room on a freezing December night. A newborn had been left on the steps of the town's Episcopal church, where Clare just happened to be the new priest. That night in the hospital was the beginning of an attraction so fierce, so forbidden, that both Russ and Clare risked compromising all of their ethics and beliefs…

In the small community of Millers Kill, gossip spreads like wildfire. So when Russ's wife kicks him out of the house, he figures it's nobody's business but his own—until a neighbor stops by and finds Mrs. Van Alstyne's butchered corpse on the kitchen floor. To the townspeople and church folk, the murder is proof that the whispered rumors about the police chief and the priest were true. But nothing is as it seems in Millers Kill, where betrayal twists old friendships—and evil waits inside quaint white clapboard farmhouses…

In All Mortal Flesh, Julia Spencer-Fleming once again delivers a riveting page-turner of a mystery "that's quite possibly the best in the series" (Romantic Times).

JULIA SPENCER-FLEMING is an Agatha, Anthony, Barry, Dilys, Gumshoe and Macavity Award winner. Her books have been shortlisted for the Edgar, and Romantic Times RC awards. Julia lives in southern Maine with her husband and three children.

“Spencer-Fleming does it again! Taut prose, brilliant pacing and two of the most interesting characters around make All Mortal Flesh all the mystery you could desire.” —New York Times bestselling author Lisa Gardner

“In a story as unpredictable as its characters, the resolution takes this series in a direction that should give the good bishop heart palpitations.” —Marilyn Stasio, The New York Times Book Review

“A hybrid amateur sleuth/police procedural with a healthy dose of romance....There's much to recommend this novel, including a pair of personable, complex protagonists.” —Boston Globe

“Fans, once they start reading, will hang Do Not Disturb signs on their doors.” —Publishers Weekly

“The latest entry in Spencer-Fleming's intelligently written series puts the relationship between Clare and Russ on a new track while once again broaching some thoughtful questions about religion, relationships, and morality in the modern world.” —Booklist

“Murder, mystery and scandal are the backbone of this captivating mystery set in the middle of small-town America. The compelling characters bring to life this riveting installment that's quite possibly the best in the series.” —Romantic Times (Top Pick!)

“[A] dizzying roller coaster of a ride, with one wholly unexpected plot twist after another following in rapid succession. And just when things seem sorted out at last, the author has one last surprise in store for the reader, one that raises all sorts of questions about where the series is headed.” —Denver Post

“It's an enjoyable series (despite some grisly crimes) and there's a real pleasure in seeing how Spencer-Fleming moves the pair's friendship with frissons along....It's a snowy, sordid path to the answers. But, like a bad wreck, Spencer-Fleming's fans will be unable to look away. Hang on: It's an unsettling ride and just when you think it's done, there's a last, long, unsettling drop.” —Portland Oregonian

“Spencer-Fleming is a fine writer, and she conveys the dizzying blankness of shock as well as anyone.” —Houston Chronicle