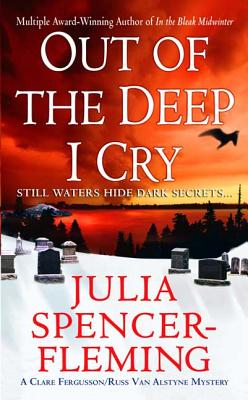 This is book number 3 in the Fergusson/Van Alstyne Mysteries series.

On April 1, 1930, Jonathan Ketchem's wife Jane walked from her house to the police department to ask for help in finding her husband. The men, worn out from a night of chasing bootleggers, did what they could. But no one ever saw Jonathan Ketchem again...

Now decades later, someone else is missing in Miller's Kill, NY. This time it's the physician of the clinic that bears the Ketchem name. Suspicion falls on a volatile single mother with a grudge against the doctor, but Reverend Clare Fergusson isn't convinced. As Clare and Russ investigate, they discover that the doctor's disappearance is linked to a bloody trail going all the way back to the hardscrabble Prohibition era. As they draw ever closer to the truth, their attraction for each other grows increasingly more difficult to resist. And their search threatens to uncover secrets that snake from one generation to the next--and to someone who's ready to kill.

Julia Spencer-Fleming has created the most intriguing entry yet in her Anthony, Agatha and Macavity Award-winning detective series, which "brings new airs and graces to the traditional small-town mystery" (New York Times Book Review).

Out of the Deep I Cry is a 2005 Edgar Award Nominee for Best Novel.

JULIA SPENCER-FLEMING is an Agatha, Anthony, Barry, Dilys, Gumshoe and Macavity Award winner. Her books have been shortlisted for the Edgar, and Romantic Times RC awards. Julia lives in southern Maine with her husband and three children.

“The third and most densely textured mystery in a series by Julia Spencer-Fleming that brings new airs and graces to the traditional small-town mystery...the rich heritage of this Adirondack Mountain region also gives depth and complexity to the crimes that the well-matched pair must solve together...yes, this is a very small town, but under Spencer-Fleming's grave and tender touch it becomes a world that you want to visit and hate to leave.” —The New York Times Book Review

“One of the great pleasures in a mystery reviewer's life is watching a promising series take root and blossom into something strong and unusual. Out of the Deep I Cry...is a perfect example.” —Baltimore Sun

“Early spring in the Adirondacks is vividly described in this third installment in the series, and both the main and secondary characters are well developed...a comfortable mix of police procedural and village cozy.” —Booklist