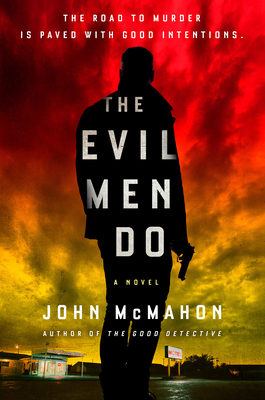 This is book number 2 in the A P.T. Marsh Novel series.

The Evil Men Do is a superb sequel to The Good Detective.

An intricate plot, expertly written, with a real Southern feel, McMahon has absolutely knocked this one out of the park. I am so excited to see where he takes Detective Marsh next! - Rebecca

The author of The Good Detective delivers a gripping and atmospheric new novel in which a cop takes on a harrowing case and confronts old personal demons.

What if the one good thing you did in your life doomed you to die?

A hard-nosed real estate baron is dead, and detectives P.T. Marsh and Remy Morgan learn there's a long list of suspects. Mason Falls, Georgia, may be a small town, but Ennis Fultz had filled it with professional rivals, angry neighbors, and a wronged ex-wife. And when Marsh realizes that this potential murder might be the least of his troubles, he begins to see what happens when ordinary people become capable of evil.

As Marsh and Morgan dig into the case, it becomes clear that Fultz's death was not an isolated case of revenge. It may be part of a dark web of crimes connected to an accident that up-ended Marsh's life a couple years earlier--and that now threatens the life of a young child. Marsh veers dangerously off track as his search for clues becomes personal..and brings him to a place where a man's good deeds turn out to be more dangerous than his worst crimes.

John McMahon is the author of The Good Detective. In his role as an ad agency creative director, he has won a Gold Clio for his work on Fiat, and he's written a Superbowl spot for Alfa Romeo. He currently lives in Southern California with his family and two rescue animals.

“A compelling, character-driven sequel to McMahon’s stunning debut, The Good Detective, this firmly establishes the author as a force in crime fiction.”--Booklist (starred review)

“McMahon excels in sweating the procedural details of the investigation.”--Kirkus Reviews