Tear It Down (A Peter Ash Novel #4) (Paperback) 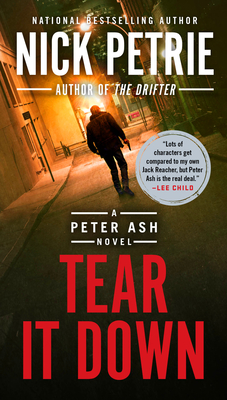 This is book number 4 in the A Peter Ash Novel series.

In the new edge-of-your-seat adventure from bestselling author Nick Petrie, Peter Ash pursues one case--and stumbles into a deadlier one--in the City of the Blues.

Iraq war veteran Peter Ash is restless in the home he shares with June Cassidy in Washington State. June knows Peter needs to be on the move, so she sends him to Memphis to help her friend Wanda Wyatt, a photographer and war correspondent who's been receiving peculiar threats. But when Peter arrives in Memphis, he finds the situation has gone downhill fast--someone has just driven a dump truck into Wanda's living room. But neither Wanda nor Peter can figure out why.

At the same time, a young homeless street musician finds himself roped into a plan to rob a jewelry store. The heist doesn't go as planned, and the young man finds himself holding a sack full of Rolexes and running for his life. When his getaway car breaks down, he steals a new one at gunpoint--Peter's 1968 green Chevrolet pickup truck.

Peter likes the skinny kid's smarts and attitude, but he soon discovers that the desperate musician is in far worse trouble than he knows. And Wanda's troubles are only beginning. Peter finds himself stuck between Memphis gangsters--looking for Rolexes and revenge--and a Mississippi ex-con and his hog-butcher brother looking for a valuable piece of family history that goes all the way back to the Civil War.

Nick Petrie is the author of three novels in the Peter Ash series. His debut The Drifter won both the ITW Thriller award and the Barry Award for Best First Novel, and was a finalist for the Edgar and the Hammett Awards. A husband and father, he lives in Whitefish Bay.

More Praise for Tear It Down

“Petrie's prose, vivid and almost tactile, is at its loving best in these jazz interludes, writing of a sound 'spontaneous, like water welling up from a spring'....This thriller is all about the thrills, and there are plenty of them.”—Booklist

“Nick Petrie is pitching a perfect game....[The] story is always moving full steam ahead....Peter Ash is fast becoming one of the best characters in the thriller genre, and Tear It Down is another must-read, can’t-miss thriller.”—The Real Book Spy

“A great series, with colorful storytelling and characters who pop right off the page.”—Raleigh News and Observer

Praise for the Peter Ash novels

“For me, no crime-fiction character has ever measured up to Jack Reacher—until, that is, I met Peter Ash.”—Entertainment Weekly

“Reacher fans, especially those who have consumed all of Child’s novels and are thirsting for more, will find Peter Ash to be a more-than-capable substitute. The heroes are cut from the same cloth, and their adventures are action-packed from start to finish.”—Fort Worth Star-Telegram

“I loved every page of this adrenaline-fueled journey. In fact, a beginning chase scene in the redwoods is not only breathtaking, it’s also one of the most original action scenes I’ve read.”—Milwaukee Journal-Sentinel

“Captivating...There are just a few really, really excellent fictional heroes who stimulate the imagination enough to cause readers to stay up until dawn. Peter Ash is one of them.”—Lincoln Journal-Star