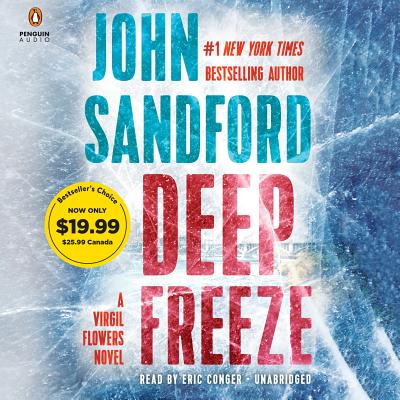 This is book number 10 in the A Virgil Flowers Novel series.

Class reunions: a time for memories—good, bad, and, as Virgil Flowers is about to find out, deadly—in this New York Times bestselling thriller from John Sandford.

Virgil knows the town of Trippton, Minnesota, a little too well. A few years back, he investigated the corrupt—and as it turned out, homicidal—local school board, and now the town’s back in view with more alarming news: A woman’s been found dead, frozen in a block of ice. There’s a possibility that it might be connected to a high school class of twenty years ago that has a mid-winter reunion coming up, and so, wrapping his coat a little tighter, Virgil begins to dig into twenty years’ worth of traumas, feuds, and bad blood. In the process, one thing becomes increasingly clear to him. It’s true what they say: High school is murder.

JOHN SANDFORD is the pseudonym for the Pulitzer Prize-winning journalist John Camp. He is the author of twenty-seven Prey novels, most recently Golden Prey; four Kidd novels, ten Virgil Flowers novels, and six other books, including three YA novels co-authored with his wife Michele Cook.

“Along the way to the satisfying ending, Virgil displays the rough humor and rough justice that make him such an appealing character.”—Publishers Weekly

“The tenth Flowers novel is a knowing portrait of small-town life layered into a very well plotted mystery. Virgil understands that, in small towns, no one ever outgrows high school, and he uses that knowledge to unravel both mysteries by dissecting the relationships and economic realities in the town. One of the very best novels in a superior series.”—Booklist (starred review)

“The reader’s quest to discover the whole truth will propel them forward, where [Sandford] has plenty of twists (and more than a few laughs) planted along the way. Deep Freeze is easily one of Sandford’s best Virgil Flowers novels yet.”—The Real Book Spy

“Add a gripping storyline, a generous helping of exquisitely conceived characters and laugh-out-loud humor that produce explosive guffaws, not muted chuckles, and you’re in for the usual late-night, don’t-even-think-of-stopping treat when Flowers hits town.”—Richmond Times-Dispatch

“You can't make this stuff up, but, thankfully, Sandford can. Imaginative, funny, and thoroughly engaging.”—Booklist (starred review)

“Perfect entertainment for readers whose hearts skip a beat when they worry that the hero won't be in time.”—Kirkus Reviews

“The funny, smart, and always entertaining Virgil Flower is back....Some writers get better with age while others get worse. Sandford is like fine wine. The more he ages, the better he is. Escape Clause proves it.”—The Huffington Post

“One of the keys to John Sandford's success as an author is his ability to take us inside the twisted psyches of his villains.”—Minneapolis Star-Tribune