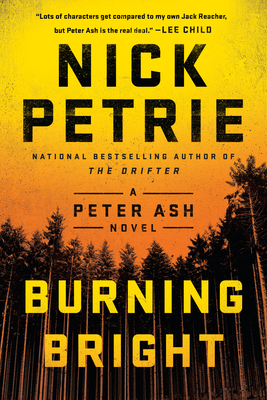 This is book number 2 in the A Peter Ash Novel series.

“Burning Bright solidifies Petrie's place among the best thriller writers working today. His hero, Peter Ash, wanders from town to town, living outdoors because his PTSD will not allow him to remain inside walls for very long. When he discovers a woman on the run from shadowy killers, Ash knows he must help her in spite of his near-crippling claustrophobia. Petrie gives us characters we love, warts and all, and there is a true sense of forward propulsion to his action-packed tale. Peter Ash is a hero for today and Burning Bright puts Petrie in the company of Lee Child and Robert Ludlum.”
— William Carl (E), Wellesley Books, Wellesley, MA

“LOTS OF CHARACTERS GET COMPARED TO MY OWN JACK REACHER, BUT PETRIE'S PETER ASH IS THE REAL DEAL.”—Lee Child

In the new novel featuring war veteran Peter Ash, “an action hero of the likes of Jack Reacher or Jason Bourne” (Lincoln Journal-Star), Ash has a woman’s life in his hands—and her mystery is stranger than he could ever imagine.

War veteran Peter Ash sought peace and quiet among the towering redwoods of northern California, but the trip isn’t quite the balm he’d hoped for. The dense forest and close fog cause his claustrophobia to buzz and spark, and then he stumbles upon a grizzly, long thought to have vanished from this part of the country. In a fight of man against bear, Peter doesn’t favor his odds, so he makes a strategic retreat up a nearby sapling.

There, he finds something strange: a climbing rope, affixed to a distant branch above. It leads to another, and another, up through the giant tree canopy, and ending at a hanging platform. On the platform is a woman on the run. From below them come the sounds of men and gunshots.

Just days ago, investigative journalist June Cassidy escaped a kidnapping by the men who are still on her trail. She suspects they’re after something belonging to her mother, a prominent software designer who recently died in an accident. June needs time to figure out what’s going on, and help from someone with Peter’s particular set of skills.

Only one step ahead of their pursuers, Peter and June must race to unravel this peculiar mystery. What they find leads them to an eccentric recluse, a shadowy pseudo-military organization, and an extraordinary tool that may change the modern world forever.

Nick Petrie received his MFA in fiction from the University of Washington, won a Hopwood Award for short fiction while an undergraduate at the University of Michigan, and his story "At the Laundromat" won the 2006 Short Story Contest in the The Seattle Review, a national literary journal. A husband and father, he runs a home-inspection business in Milwaukee. His novels in the Peter Ash series include The Drifter, winner of the ITW Thriller Award and the Barry Award for Best First Novel, Burning Bright, and Light It Up.

“For me, no crime-fiction character has ever measured up to Jack Reacher—until, that is, I met Peter Ash. . . . Petrie’s writing is smooth, almost melodic, and he’s very, very good at ratcheting up stomach-churning tension.”—Entertainment Weekly

“Reacher fans, especially those who have consumed all of Child’s novels and are thirsting for more, will find Peter Ash to be a more-than-capable substitute. The heroes are cut from the same cloth, and their adventures are action-packed from start to finish. . . . Petrie [is] a very talented writer to boot.”—Fort Worth Star-Telegram

“I loved every page of this adrenaline-fueled journey. In fact, a beginning chase scene in the redwoods is not only breathtaking, it’s also one of the most original action scenes I’ve read.”—Milwaukee Journal-Sentinel

“I loved it. . . . This is an extreme thriller fueled with gallons of adrenaline, unrelenting action and dangerous characters.”—The Minneapolis Star-Tribune

“Captivating . . . There are just a few really, really excellent fictional heroes who stimulate the imagination enough to cause readers to stay up until dawn. Peter Ash is one of them.”—Lincoln Journal-Star

“The world of Peter Ash is a terrifying place, and it is expertly drawn by Nick Petrie. . . . A fast-paced thriller.”—The Washington Times

“In a sentence: all of the ‘this is the series to read when you are caught up with the Reacher novels’ hype is plenty justified. Peter Ash is a winning hero, and in this second book in the series, June Cassidy is an excellent counter-heroine, running from those who killed her mother and kidnapped her (she escapes in a really nifty opening sequence.) It's about secrets and espionage and cyber-technology and being off the grid and I enjoyed it so much more than I expected to and now have to catch up with the first book (The Drifter) and read onwards.”—Sarah Weinman

“Following his first-class debut, The Drifter, Nick Petrie shows no signs of letting up on the action or character development. . . . The investigation is fraught with mercenary violence and heady computer technology, but the characters' talents always feel righteously earned. Backed by a cadre of appealing secondary characters, Jane and Ash's chase leads to a place they never expected and a satisfying conclusion worthy of the risks.”—Shelf Awareness

“Kept me happily reading to the end. . . . The romance of two misfits who have finally found their missing piece, the humor and stalwart courage of the main characters, and their clever maneuvers will make this one a must-read.”—Raleigh News & Observer

“Readers can expect some good twists on the way to a hair-raising finish. Another fine thriller in what's shaping up to be a hell of a series.”—Kirkus Reviews (starred review)

“This sequel to The Drifter continues to note the plight of veterans returning from war as it highlights the perils of advances in artificial intelligence. But most of all it’s a suspenseful high-tech ride, complete with a steadily mounting body count and a compelling protagonist.”—Booklist (starred review)

“A top-notch series of thrillers marked by a considerable sympathy for veterans. . . . Aficionados of Lee Child’s Jack Reacher will enjoy getting to know this new action hero.”—Library Journal

“From start to finish, Burning Bright is a rollicking rollercoaster of an adventure. There's never a dull moment, making this the sort of read you'll speed through in one or two sittings—and it's just the thing for those who like their badasses infinitely capable with more than a little bit of heart.”—CriminalElement.com

“… [T]he fast-paced, action-heavy follow-up to Nicholas Petrie’s debut novel, The Drifter...like [Jack] Reacher, [Peter] Ash is a hard-nosed, take-no-nonsense hero who prefers to shoot first and ask questions later…Petrie wastes no time or excess words as the first hundred pages rip by. Things calm down a bit in the middle as the book’s intrepid heroes attempt to solve the puzzle and explore their own feelings toward each other before ramping up again in an explosive finale.”—BookPage

“Action-packed . . . [an] expansive and even upbeat novel.”—The Capitol Times

Praise for The Drifter

“As I was reading Petrie’s exceptional debut, O’Brien’s [The Things They Carried] buzzed at the edges of my consciousness, casting the newer book as a thematic sequel to O’Brien’s classic. . .The Drifter may be about a different war, but it’s about the same hell, and in this book it’s about the things a vet carries home with him....[The] lean prose, gritty descriptions, and raw psychological depth give the novel a feel that reminded me of early Dennis Lehane.”—Milwaukee Journal-Sentinel

“The Drifter is a stunning debut. Peter Ash is one of the most complex characters I've come across in a long time. The pace is like a sniper round, extraordinarily fast and precisely calibrated. The prose is fluid, original and frequently brilliant, the story heart-wrenching and uplifting at the same time. There is grit in this tale that will stay with you for a long time. Perhaps forever. I eagerly await Nick Petrie's next creation.”—David Baldacci, New York Times-bestselling author of Memory Man

“A powerful, empathetic, and entertaining tale about the plight many combat veterans face when they come home from Iraq and Afghanistan. Top-notch storytelling.”—Kirkus Reviews (starred)

“[Ash’s]  sharply intelligent, witty voice strikes the right tone for an honest exploration of the challenges returning veterans face, and while this wandering veteran will remind some of Jack Reacher, Peter’s struggle to overcome PTSD sets him apart. An absorbing thriller debut with heart.”—Booklist

“Petrie’s expertly paced plot sets a colorful array of characters on a collision course. Readers will look forward to seeing more of the resourceful Ash.”—Publishers Weekly

“Petrie's impressive debut thriller is fine tuned, the action gripping, and through Ash offers a well-drawn portrait of a vet who can't escape his combat experience. Like Raymond Chandler's Philip Marlowe, Ash's philosophy of detection is to poke a stick into something and see what happens. His discoveries will keep the reader on edge and whet the appetite for more from this author.”—Library Journal

“Nick Petrie’s debut novel follows the compelling story of one former Marine’s struggle to reacclimate himself to civilian life while honoring his commitment to a fallen soldier. That alone is reason to keep reading, but Petrie amps up the stakes in surprising fashion, creating a story that is moving, thrilling and satisfying on every level....[An] intimate story of personal discovery as well as an obsessive pageturner of a book.”—BookPage

“Gritty and engaging, this debut novel will capture readers from the first word. Edge-of-your-seat action keeps the plot racing to a stunning conclusion....This is a fantastic first novel and a captivating thriller.”—RT Book Reviews (4 ½ stars)

“With The Drifter, Nick Petrie has written just about the perfect thriller.  I haven't read such a well-crafted and gripping story in a month of Sundays.  If this is Petrie's first novel, watch out for the second one.  But why wait?  This one's here now, and it's a home run.”—John Lescroart, New York Times-bestselling author of The Keeper

“A tangled tale of intrigue, action, and adventure with a battle-scarred hero who definitely rises to the challenge.  The clever plot is firmly conceived and crisp writing makes this a terrific story, told terrifically.”—Steve Berry, New York Times-bestselling author of The Lincoln Myth

“Nick Petrie's The Drifter has one of the most thrilling openings I've ever read, involving a dank crawlspace, the nastiest, smelliest dog in creation, and a former Marine lieutenant still suffering from the trauma of his war.  It can't get better than this, I figured, but it does.  Petrie's novel keeps accelerating even as it burrows ever deeper into the dark heart of the new American dream.  It is a sterling debut.  And yes, the dog is a star.”—William Lashner, New York Times-bestselling author of The Barkeep

“A timely, intelligent thriller, as much an indictment as a gripping page-turner. Nick Petrie’s debut simmers and seethes until it finally boils over in a masterfully-drawn final showdown. Teeming with grit and desperation and told in spare, vivid prose, this is not a debut you’ll want to miss.”—Owen Laukkanen, author of The Stolen Ones