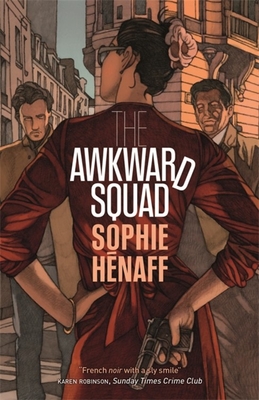 Officer Anne Capestan's team of misfits will have to work together to investigate a decades-old unsolved murder . . . and in the process uncover a trail of corruption that leads to the top of the Paris police force.

"A delightful creation." --The Times

"Quirky and interesting . . . Much to savor." --Library Journal

Was the old lady murdered seven years ago really just the victim of a botched robbery? Who was behind the dead sailor discovered in the Seine with three gunshot wounds? And why does there seem to be a curious link with a ferry that was shipwrecked off the Florida coast many years previously?

Suspended from her job as a promising police officer for firing "one bullet too many," Anne Capestan is expecting the worst when she is summoned to HQ to learn her fate. Instead, she is told that she will head up a new police squad, working on solving long-abandoned cold cases.

Though relieved to still have a job, Capestan is not overjoyed by the prospect of her new role--and even less so when she meets her new team: a crowd of misfits, troublemakers, and problem cases, none of whom are fit for purpose and yet none of whom can be fired.

Sophie Hénaff is a journalist, author, and former Lyonnaise bar owner. She began her journalism career as a critic at Lyon Poche, before moving to Paris to write for Cosmopolitan, where she established her own humorous column, "La Cosmolite." The Awkward Squad was first published as Poulets grillés in 2015, and is her first novel.

"Readers who appreciate quirky and interesting characters with their mysteries will find much to savor in this series launch, which is as much about a crew of police rejects as the crimes they investigate."
—Library Journal

"Hénaff's fun first novel offers a wry look at Parisian policing and the infinite twists of the bureaucracy . . . Commissaire Anne Capestan, her career on tenterhooks for her role in the shooting of a suspect, takes charge of a cold-case squad populated by departmental castoffs who can't be fired but refuse to quit. Starting with a sense of wounded pragmatism that gives way to an increasingly focused joy of the hunt, Capestan marshals [the] team."
—Publishers Weekly

"A marvelous French police procedural laced with subtle--and sometimes, not so subtle--humor about a squad of assorted losers who cannot be fired . . . An absorbing, sometimes laugh-out-loud, mystery laced with some graphic scenes of violence's aftermath. One can only sincerely hope that this is the first title in a very long series."
—D.R. Meredith, New York Journal of Books

"A ragtag group of cops whom nobody else wants get their own squad. Could be a sitcom. Could be noir. Could be the first entry in this smart Parisian mystery series."
—Booklist

"Hénaff's Capestan is a delightful creation, the members of her team amusing and the book lively."
—Marcel Berlins, The Times

"Capestan's crew positively sparkle with life, and it is full of very lively humor."
—Shots Magazine

"Misfit Paris cops bring an entertaining collection of idiosyncrasies to the newly formed cold-case team headed by impetuous detective Anne Capestan--though the fun has to stop as they start to piece together evidence of serious corruption in high places."
—Crime Club

"A scintillating read . . . We are already hooked."
—Elle UK

"From her first novel, Sophie Hénaff proves that she can really pull the trigger."
—Paris Match

"You will not want to tear yourself away . . . Extremely original."
—Jean-Louis Debré Le Point