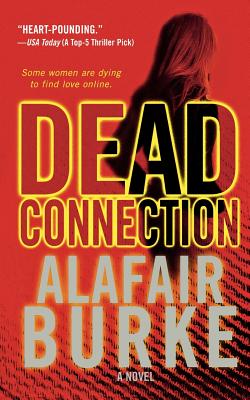 This is book number 1 in the Ellie Hatcher series.

Two young, single women are murdered on the streets of New York City, exactly one year apart. Their only connection: Both had posted profiles on the popular online dating service, FirstDate.com. Enter NYPD Detective Ellie Hatcher. She fits the profile of the victims, and is called in for a special assignment to the homicide team.

FirstDate.com promises its online clientele that they'll remain anonymous and safe. But Ellie is about to discover that the company is protecting the identity of the killer more than it protected the safety of his victims...

Soon Ellie is entangled in a web of anonymous identities and false leads as she tries to attract and lure in a suspect. But time is running out to find the killer before he claims his next victim which, in a devastating twist of fate, is looking more and more likely to be Ellie herself....

A former deputy district attorney in Portland, Oregon, Alafair Burke now teaches criminal law at Hofstra School of Law and lives in Long Island, New York. The daughter of the acclaimed crime writer James Lee Burke, she is the author of the Samantha Kincaid series, including Judgment Calls and Missing Justice.

“Intricately-plotted, fast-paced...Holds the reader's attention from first word to last, and begs for a sequel.” —Kirkus Reviews

“Pure, heart-pounding escapism . . . Burke taps into a cultural hot-button issue: the increasing popularity of online dating sites and the very real possibility that the person you are connecting with is lying about who he/she is.” —USA Today, in a Top 5 summer thriller pick

“Burke, the daughter of Cajun thriller maestro James Lee, is a terrific web spinner. She knows when and how to drop clues to keep readers at her mercy. A-” —Entertainment Weekly

“Intelligent, emotionally literate and unusually--given the dark subject-matter--funny, with strong characters and tight plotting, Dead Connection is a riveting read.” —The Guardian