A Grave Talent: A Novel (A Kate Martinelli Mystery #1) (Paperback) 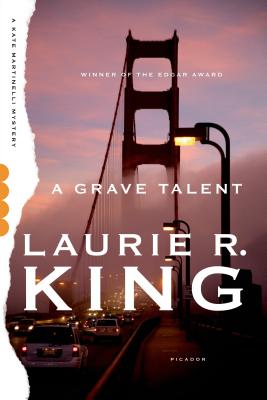 This is book number 1 in the A Kate Martinelli Mystery series.

In Laurie R. King's Grave Talent, the unthinkable has happened in a small community outside of San Francisco. A series of shocking murders has occurred, the victims far too innocent and defenseless. For lesbian Detective Kate Martinelli, just promoted to Homicide and paired with a seasoned cop who's less than thrilled to be handed a green partner, it's a difficult case that just keeps getting harder.

Then the police receive what appears to be a case-breaking lead: it seems that one of the residents of this odd colony is Vaun Adams, arguably the century's greatest woman painter and a notorious felon once convicted of a heinous crime.

But what really happened eighteen years ago? To bring a murderer to justice, Kate must delve into the artist's dark past—even if it means losing everything she holds dear.

Laurie R. King is the Edgar Award–winning author of the Kate Martinelli novels and the acclaimed Mary Russell-Sherlock Holmes mysteries, as well as a few stand-alone novels. The Beekeeper’s Apprentice, the first in her Mary Russell series, was nominated for an Agatha Award and was named one of the Century’s Best 100 Mysteries by the Independent Mystery Booksellers Association. A Monstrous Regiment of Women won the Nero Wolfe Award. She has degrees in theology, and besides writing she has also managed a coffee store and raised children, vegetables, and the occasional building. She lives in northern California.

“A Grave Talent kept me reading deep into the night.” —The Boston Globe