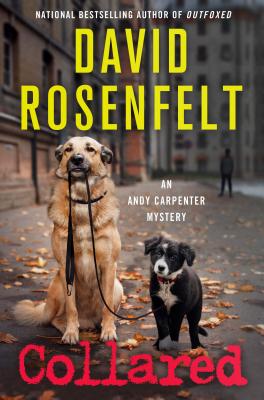 This is book number 15 in the An Andy Carpenter Novel series.

Lawyer Andy Carpenter’s true passion is the Tara Foundation, the dog rescue organization he runs with his friend Willie Miller. All kinds of dogs make their way to the foundation, and it isn’t that surprising to find a dog abandoned at the shelter one morning, though it was accompanied by a mysterious anonymous note. But they are quite surprised when they scan the dog’s embedded chip, and discover that they know this dog. He is the “DNA dog.”

Two and a half years ago, Jill Hickman was a single mother of an adopted baby. Her baby and dog were kidnapped in broad daylight in Eastside Park, and they haven’t been seen since. A tip came in that ID’d a former boyfriend of Hickman’s, Keith Wachtel, as the kidnapper. A search of his house showed no sign of the child but did uncover more incriminating evidence, and the clincher that generated Wachtel’s arrest was some dog hair, notable since Wachtel did not have a dog. DNA tests showed conclusively that the hair belonged to Hickman’s dog. Wachtel was convicted of kidnapping, but the dog and baby were never found.

Now, with the reappearance of the dog, the case is brought back to light, and the search for the child renewed. Goaded by his wife’s desire to help a friend and fellow mother and Andy’s desire to make sure the real kidnapper is in jail, Andy and his team enter the case. But what they start to uncover is far more complicated and dangerous than they ever expected.

“Reading the “Andy Carpenter” series by David Rosenfelt is dangerous. The books should come with warnings: “Read with Caution, Extremely Addicting.” The latest book in the series, “Collared,” is no exception. The writing is consistently unique and superb. And the laughs never stop.”
--Huffington Post

“Rosenfelt's matchless gift for feather-light exposition that hurtles along without ever feeling rushed or foggy allows him to keep the complications coming until nearly the end.”
-- Kirkus Reviews

“Faithful readers will find that Andy has lost none of his sardonic wit and cynical view. Rosenfelt structures chapters to keep the pages turning.”
--Booklist

“Smart plot twists ensue, and everyone—Andy, Laurie, and readers—are all the happier for it.”
--Publishers Weekly

"This installment is crafted with an intriguing premise, witty recurrent characters and a well-conceived mystery that unravels with surprising twists."
--Shelf Awareness

“All the elements are in place for an engrossing puzzle, one that’s satisfyingly solved by the last page.”
--Bark Magazine

“As always, he writes a great legal thriller with his usual entourage that are clever and laugh-out-loud funny. There's always a special dog or three to keep us dog lovers happy and coming back for more. David Rosenfelt never disappoints!”
-–Fresh Fiction