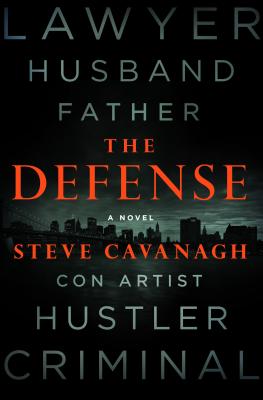 This is book number 1 in the Eddie Flynn series.

"If you're a fan of John Grisham, Scott Turow, and Brad Meltzer, then you will be a fan of Steve Cavanagh's The Defense." —Nelson DeMille, #1 New York Times bestselling author of Radiant Angel

Eddie Flynn used to be a con artist. Then he became a lawyer. Turns out the two aren't that different.

Former con artist turned lawyer Eddie Flynn gave up the law a year ago after a disastrous case, and he vowed never to step foot in a courtroom again. But now he doesn't have a choice. The head of the Russian mob in New York City, on trial for murder, has kidnapped Eddie's ten-year-old daughter: Eddie has to take this case whether he likes it or not.

Using his razor-sharp wit and every con, bluff, grift, and trick in the book, Eddie has only forty-eight hours to defend an impossible murder trial. And if he loses this case, he loses everything.

“Cavanagh’s stellar debut provides everything a reader could ask for in a thriller—nail-biting suspense, a Russian nesting doll of a plot, and an original and compelling lead.” —Publishers Weekly, starred review

“If you're a fan of John Grisham, Scott Turow, and Brad Meltzer, then you will be a fan of Steve Cavanagh's The Defense. Cavanagh's debut novel introduces a wonderfully flawed hero, Eddie Flynn, one-time con man, now turned lawyer, who will hold you spellbound. This is a hell of a genre-bending book. I hope Cavanagh's working on the sequel.” —Nelson DeMille, #1 New York Times bestselling author of Radiant Angel

“Steve Cavanagh's The Defense puts the 'thrill' back in 'legal thriller.' Non-stop action, unexpected and totally cool plot twists, a sympathetic genius of a con-man/attorney, and a clock that never ever ever stops ticking -- this isn't narrative drive, it's rocket-like narrative propulsion! Hop aboard and enjoy the ride!” —John Lescroart, New York Times bestselling author of The Fall and the Dismas Hardy series

“Reads a lot like a courtroom drama that Lee Child might write about Jack Reacher's younger, hotter-headed brother.” —Irish Times

“The Defense is the best kind of legal thriller, proving that the real drama takes place outside of the courtroom, in the head and the heart. I started reading to see what would happen next, but couldn't put the book down because I needed to learn more about con man turned lawyer Eddie Flynn, the smartest man in the courthouse. I was hooked until the last satisfying page.” —Alafair Burke, New York Times bestselling author of The Ex