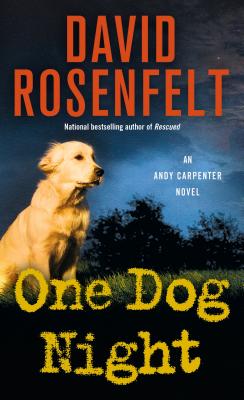 By David Rosenfelt
$7.99
Hard to Find

This is book number 9 in the An Andy Carpenter Novel series.

“ONE DOG NIGHT [IS] A GEM.”—BOOKLIST (STARRED REVIEW)

For six years Noah Galloway has lived with a horrible secret and the fear that the life he rebuilt could be shattered at any moment. His dread becomes a certainty when he’s arrested for the arson murder of twenty-six people. Now he needs a good defense lawyer—someone he can trust, and who will believe in him. There’s only one man for the job: Andy Carpenter.

But Andy is not in the market for a new client. So Noah plays his hole card: a shared love for Andy’s golden retriever, Tara, and the knowledge that Andy wasn’t her original owner—Noah rescued Tara first. When Noah wasn’t able to care for her any longer, he made sure that Tara was placed in the right home: Andy’s. Surely Andy can get to the bottom of a long-ago conspiracy designed to frame Noah…and find a way to save his life, just as he did Tara’s?