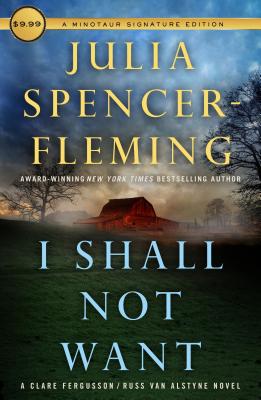 This is book number 6 in the Fergusson/Van Alstyne Mysteries series.

I Shall Not Want is the sixth in Julia Spencer-Fleming's New York Times bestselling series—the strongest in the Russ Van Alstyne and Clare Fergusson novels—is a great entry into this beloved series.

In the searing conclusion to All Mortal Flesh, Russ's precarious balance between duty and desire was broken by his wife's tragic death. Now, Russ and Episcopal priest Clare Fergusson are separated by a wall of guilt and grief.

When a Mexican farmhand stumbles over a Latino man killed with a single shot to the back of his head, Clare is reluctantly drawn into the investigation through her involvement with the migrant community. The discovery of two more bodies executed in the same way ignites fears that a serial killer is loose in the rural Adirondack town of Millers Kill.

As spring turns into summer, Russ is plagued by media hysteria, conflict within the police department, and a series of baffling assaults. Throughout the escalating tensions, his and Clare's emotions toward each other are mixed. But their bodies know only one direction and they will find themselves seeking each other out even as they intend to keep distant.

With new packaging, fans new and old will welcome this stunning edition as a refresher or an entry in this beloved series.