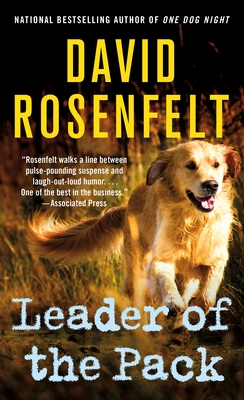 By David Rosenfelt
$7.99
Email or call for price.

This is book number 10 in the An Andy Carpenter Novel series.

“Rosenfelt walks a line between pulse-pounding suspense and laugh-out-loud humor…One of the best in the business.”—Associated Press

“Entertaining…a good-natured read that isn’t quite as easygoing as it seems. Like its hero.”
—Booklist

Over the course of his legal career, Andy Carpenter has lost a few cases. But that doesn’t mean he forgets his clients. Andy has always been convinced that Joey Desimone, a man convicted of murder nine years ago, was innocent—and that Joey’s family’s connections to organized crime played a pivotal role in his conviction. While there isn't much Andy can do while he serves out his prison sentence, there is one way he can help Joey: By checking up on his elderly Uncle Nick and taking his dog, Tara, on a few visits.


Nick’s memory is going, but when Andy tries to explain why he’s there, it jogs something in the old man’s mind—and his comments leave Andy wondering if he just might hold the key to Joey’s freedom after all. Andy grabs on to this thread of possibility and follows it into a world where the oath of silence is stronger than blood ties…and where people will do anything to make sure their secrets stay hidden.

DAVID ROSENFELT is the Edgar-nominated and Shamus Award-winning author of more than twenty Andy Carpenter novels, including One Dog Night, Collared, and Deck the Hounds; its spinoff series, The K-Team; the Doug Brock thriller series, which starts with Fade to Black; and stand-alone thrillers including Heart of a Killer and On Borrowed Time. Rosenfelt and his wife live in Maine with an ever-changing pack of rescue dogs. Their epic cross-country move with 25 of these dogs, culminating in the creation of the Tara Foundation, is chronicled in Dogtripping.

Praise for Leader of the Pack

“Rosenfelt still weaves a compelling narrative that will stump even the expert Perry Mason fan.”—Associated Press

“A fun mystery…surprising enough that I gasped in public…The ending is deeply satisfying.”—[New Jersey] Star Ledger

Praise for One Dog Night

“A blessed anomaly in crime fiction…Andy is like a gulp of cold water on a steamy day…Rosenfelt peels back the layers of puzzlement ever so skillfully, tantalizing us throughout until, finally, both Andy and the reader are enlightened, simultaneously. A gem.”—Booklist (starred review)