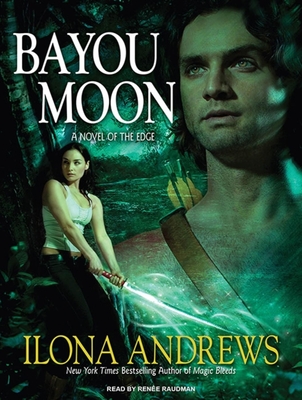 This is book number 2 in the Edge series.

Cerise Mar and her unruly clan are cash poor but land rich, claiming a large swathe of the Mire, the Edge swamplands between the state of Louisiana and the Weird. When her parents vanish, her clan's long-time rivals are suspect number one. But all is not as it seems. Two nations of the Weird are waging a cold war fought by feint and espionage, and their conflict is about to spill over into the Edge and Cerise's life. William, a changeling soldier who left behind the politics of the Weird, has been forced back into service to track down a rival nation's spymaster. When William's and Cerise's missions lead them to cross paths, sparks fly but they'll have to work together if they want to succeed and survive.

Ilona Andrews is the pseudonym for a husband-and-wife writing team who live in Georgia, where they are currently working on Kate Daniels's next adventure.

Renee Raudman is a multi-award-winning audiobook narrator and actor. A multiple Audie Award nominee, she has earned a number of "AudioFile" Earphones Awards, and her narration of "Homer's Odyssey" by Gwen Cooper was selected by "Library Journal" as one of the best audiobooks of 2009.

"[Renée Raudman] uses pace and intensity to keep up with the struggles of the characters, who are caught up in old feuds to protect their land and family." ---AudioFile