What My Sister Knew (Paperback) 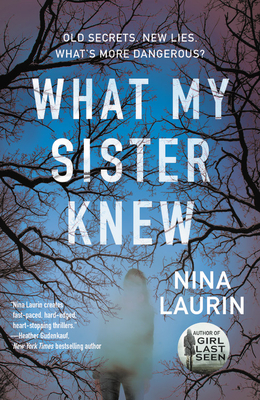 From the author of Girl Last Seen comes a psychological thriller that delivers Nina Laurin's signature "heart-stopping" suspense (Heather Gudenkauf, New York Times bestselling author).
"...currently wanted by the police. If you know anything about the suspect's whereabouts, please call..."

I look up at the TV screen, and my twin brother's face is splashed across it, life-size.

It's a shock that makes my breath catch. This is my brother as an adult, my brother who I last saw fifteen years ago after the fire that killed our parents, covered in soot, clutching a lighter in his hand, his knuckles stark white against the dirt and ash.

Everyone always said he'd grow up to be a heartbreaker. But his face has gone gaunt instead. The stubble on his cheeks and chin is patchy, and his eyes look dull and dark.

My first thought is that it's not him. Not my beautiful brother, the golden boy who everyone loved. Yet, deep down, I've always known this would eventually happen.

What did you do this time, Eli? What the hell did you do?

Nina Laurin studied Creative Writing at Concordia University in Montreal, where she currently lives. She arrived there when she was just twelve years old, and she speaks and reads in Russian, French, and English but writes her novels in English. She wrote her first novel while getting her writing degree, and Girl Last Seen was a bestseller a year later in 2017. The follow-up, What My Sister Knew, came out in summer 2018 to critical acclaim. Nina is fascinated by the darker side of mundane things, and she's always on the lookout for her next twisted book idea. She blogs about books and writing on her own site, thrillerina.wordpress.com.

"Nina Laurin's psychological suspense thrill ride will have you ripping through its pages at warp speed as you dig for the truth about a fateful event that drove two twin siblings apart."—PopSugar.com

"[A]n intense psychological thriller that has a surprise twist... Laurin provides an insightful look at how secrets can shatter a bond between twins."—Publishers Weekly

"A twisty, mind-bending thriller that will keep you on the edge of your seat as she probes the bond and secrets between twins."—USAToday.com

"There are an abundance of suspense/thriller writers, but none is better than Nina Laurin at fooling the reader as her plotline takes numerous 90 degree turns, while she builds suspense one red herring at a time. What My Sister Knew is a thriller built on shifting sands; just as one feels solid ground under his feet, the earth cracks open, and the reader falls into the abyss where nothing and no one is trustworthy. Laurin writes in prose that is both eloquent and concise, and is a genius at hiding the truth in plain sight if only the reader would think of the psychology of the characters rather than the evidence. No suspense fan should miss this book."—NYJournalof Books.com

"One of the best things a novel can do is keep you guessing, and Nina Laurin's sophomore effort does exactly that. What My Sister Knew is a rich, complex story about the effects of secrets, the lingering consequences of abuse, the inner workings of deeply troubled households, filial love, and the way we are shaped by trauma. Fans of psychological thrillers would be remiss to skip this one."—CriminalElement.com

"Nina Laurin delivers an action-packed, mind-bending ride. Just when you think you've discovered the truth, a new secret is revealed, making you question whether there really is a line between good and evil."—Wendy Walker, bestselling author of All is Not Forgotten

"4 Stars! I am two for two when it comes to Nina Laurin's books! The book starts out with questions, suspense, and intrigue, and slowly builds to a bursting crescendo as we learn more about Andrea, Eli, and their family. If you had a chance to read the author's first novel and enjoyed it, I'm positive you'll gobble up What My Sister Knew as well. It was a fast read that had me flying through the pages and entertained me for hours on end."—TheSuspenseIsThrillingMe.com

"A dramatic, suspenseful, incredibly thrilling novel that focuses on the sibling dynamic. It's a must-read for anyone who loves a good thriller."—SarahScoop.com