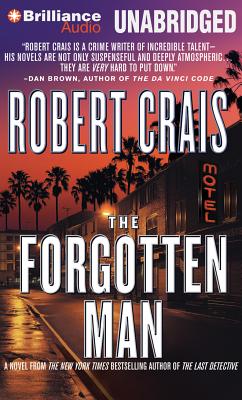 This is book number 10 in the Elvis Cole/Joe Pike Novels series.

" A] riveting novel with a vivid sense of place . . . Anyone who enjoys a well-written, fast-paced, noirish thriller with a great aha moment shouldn't miss The Forgotten Man."--The Boston Globe

In an alleyway in Los Angeles, an old man, clutching faded newspaper clippings and gasping his last words to a cop, lies dying of a gunshot wound. The victim claims to be P.I. Elvis Cole's long-lost father--a stranger who has always haunted his son.

As a teenager, Cole searched desperately for his father. As a man, he faces the frightening possibility that this murder victim was himself a killer. Caught in limbo between a broken love affair and way too much publicity over his last case, Cole at first resists getting involved with this new case. Then it consumes him. Now a stranger's terrifying secrets--and a hunt for his killer--give Cole a frightening glimpse into his own past. And he can't tell if it's forgiveness or a bullet that's coming next. . . .

"Robert Crais is a crime writer of incredible talent--his novels are not only suspenseful and deeply atmospheric but very hard to put down."--Dan Brown, author of The Da Vinci Code

"A brutal but exhilarating climax."--USA Today