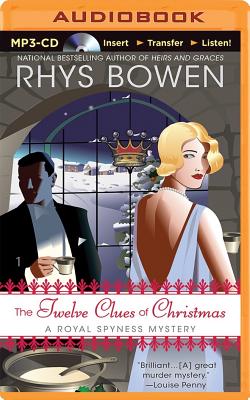 She may be 35th in line for the throne, but Lady Georgiana Rannoch cannot wait to ring in the new year--before a Christmas killer wrings another neck...

On the first day of Christmas, my true love gave to me--well, actually, my true love, Darcy O'Mara, is spending a feliz navidad tramping around South America. Meanwhile, Mummy is holed up in a tiny village called Tiddleton-under-Lovey with that droll Noel Coward And I'm snowed in at Castle Rannoch with my bumbling brother, Binky, and sourpuss sister-in-law, Fig. So it's a miracle when I contrive to land a position as hostess to a posh holiday party in Tiddleton. The village is like something out of A Christmas Carol But no sooner have I arrived than a neighborhood nuisance, a fellow named Freddie falls out of a tree, dead.... Dickensian, indeed.

Freddie's merely a stocking stuffer. On my second day in town, another so-called accident turns up another mincemeat pie--and yet another on my third. The village is buzzing that a recent prison break could have something to do with it...that, or a long-standing witch's curse. I'm not so sure. But after Darcy shows up beneath the mistletoe, anything could be possible in this wicked wonderland.