A Murderous Marriage (A Lady and Lady's Maid Mystery #4) (Hardcover) 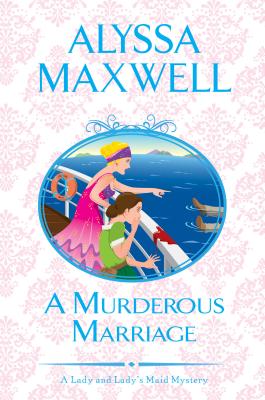 Lady Phoebe Renshaw and her lady’s maid, Eva Huntford, are preparing for a wedding, but it may not be the happy occasion everyone hopes for . . .

Since the Great War, some family fortunes have suffered, including those of the Renshaws. Despite being the granddaughter of an earl, Julia Renshaw is under pressure to marry for money—and has settled for Gilbert Townsend, a viscount and a wealthy industrialist. He is decades older than Julia, and it’s clear to her sister Phoebe—and to Eva, who has been like a surrogate mother to the girls—that this is not a love match. Nevertheless, the wedding takes place—and in a hurry.

At the reception aboard the groom’s yacht, there appears to be tension between Gil and several guests: his best man, a fellow veteran of the Boer War; his grouchy spinster sister; and his current heir, a nervous young cousin named Ernest. The bride is also less than pleased when she discovers that her honeymoon will be more crowded than expected—with Gil’s pretty secretary, among others, coming along.

That very night, Julia pounds on her sister’s door, brandishing a bandaged hand and reporting a hot-tempered outburst on her new husband’s part. Julia is feeling doubt and regret about her hasty decision, but returns to the boat. Then the next morning, before the yacht can depart the harbor, Gil’s body is found in the water below—and Phoebe and Eva must discover who pushed him over . . . before the Renshaws’ social standing is irreparably stained by Julia’s arrest for his murder . . .

Alyssa Maxwell knew from an early age that she wanted to be a novelist. Growing up in New England and traveling to Great Britain fueled a passion for history, while a love of puzzles of all kinds drew her to the mystery genre. She and her husband reside in Florida, where she loves to watch BBC productions, sip tea in the afternoons, and delve into the past. You can learn more about Alyssa and her books at www.alyssamaxwell.com.

Praise for Alyssa Maxwell and her Lady and Lady’s Maid Mysteries!

“Well-crafted . . . Maxwell artfully portrays the personal dynamics of English society at the time, and readers will hope to see more of the endearing Phoebe and Eva.”
—Publishers Weekly

“An unusual twist rooted in the recent horrors of World War I adds interest to a country-house mystery.”
—Kirkus Reviews

A Pinch of Poison

“A sweet, delightful mystery, which is sure to appeal to historical-fiction and mystery readers alike.”
—Foreword Reviews

“Along with a bracing mystery, Maxwell explores compelling themes. Although this is from a slightly earlier time period, it’s a good match with Rhys Bowen’s Her Royal Spyness series.”
—Booklist

“Entertaining . . . some of the characters and scenes are highly reminiscent of TV’s Downton Abbey, but Maxwell makes Phoebe and Eva distinctive personalities in their own right.”
—Publishers Weekly

“The story is so good, you don’t want it to end.”
—Suspense Magazine

“Downton Abbey fans will enjoy Maxwell’s evocative descriptions of a particular society as it transitions from the Edwardian Age to modern times.”
—Library Journal