The Word Is Murder (MP3 CD) 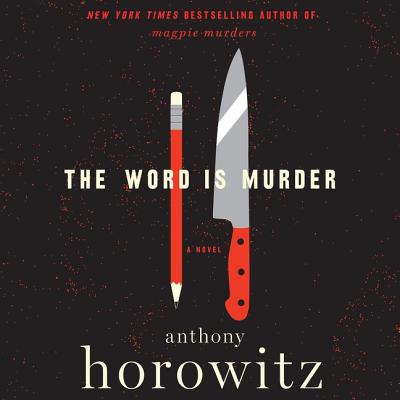 What a book!!!  I loved it!!!  Horowitz has again confirmed he's one of the best! The book begins with an older lady walking into a funeral home -- to plan her own funeral.  Six hours later, she's dead.

Daniel Hawthorne, a brilliant albeit disgraced Scotland Yard police detective is called in as a consultant to solve the crime.  But Hawthorne wants someone to write a novel based on his investigation, and since he's worked on several projects with Anthony Horowitz in the past...seems only logical to get Horowitz to follow him around and write the story. So begins the collaboration of the two.  As Horowitz becomes Watson to Hawthorne's Holmes, they soon get down to solving the crime.  The juxtaposition of the two characters - Hawthorne (eccentric and multilayered); Horowitz (methodical and detailed) is brilliant.

“When a healthy 60-year-old woman is found strangled in her London home the very day she had organized and paid for her own funeral, former police detective—now consultant—Daniel Hawthorne convinces author Anthony Horowitz to shadow his investigation to eventually publish this very story. Imagine sitting in a darkened English pub listening to Horowitz bemoaning his involvement as he tells the story of the unlikeable but captivating Hawthorne. Readers will quickly join in playing detective as characters, plot twists, clues, and red herrings escalate while enjoying the old-fashioned feel of Agatha Christie and Sherlock Holmes in a modern setting. Delicious!”
— Jennifer Gwydir, Blue Willow Bookshop, Houston, TX

SHE PLANNED HER OWN FUNERAL. BUT DID SHE ARRANGE HER OWN MURDER?

New York Times bestselling author of Magpie Murders and Moriarty, Anthony Horowitz has yet again brilliantly reinvented the classic crime novel, this time writing a fictional version of himself as the Watson to a modern-day Holmes.

One bright spring morning in London, Diana Cowper - the wealthy mother of a famous actor - enters a funeral parlor. She is there to plan her own service.

Six hours later she is found dead, strangled with a curtain cord in her own home.

Enter disgraced police detective Daniel Hawthorne, a brilliant, eccentric investigator who's as quick with an insult as he is to crack a case. Hawthorne needs a ghost writer to document his life; a Watson to his Holmes. He chooses Anthony Horowitz.

Drawn in against his will, Horowitz soon finds himself a the center of a story he cannot control. Hawthorne is brusque, temperamental and annoying but even so his latest case with its many twists and turns proves irresistible. The writer and the detective form an unusual partnership. At the same time, it soon becomes clear that Hawthorne is hiding some dark secrets of his own.

A masterful and tricky mystery that springs many surprises, The Word is Murder is Anthony Horowitz at his very best.