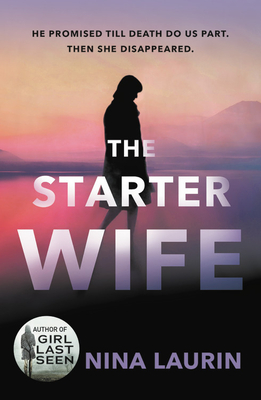 From the bestselling author of Girl Last Seen comes "a spine-tingler" (Booklist) of a psychological suspense, perfect for fans of Lisa Jewell and Jessica Knoll.

Local police have announced that they're closing the investigation of the suspected drowning of 37-year-old painter Colleen Westcott. She disappeared on April 11, 2010, and her car was found parked near the waterfront in Cleveland two days later, but her body has never been found. The chief of police has stated that no concrete evidence of foul play has been discovered in the probe.

close the online search window, annoyed. These articles never have enough detail. They think my husband's first wife disappeared or they think she is dead. There's a big difference.

My phone rings, jarring me away from my thoughts, and when I pick it up, it's an unknown number. The only answer to my slightly breathless hello is empty static.

When the voice does finally come, it's female, low, muffled somehow. "Where is it, Claire? What did you do with it? Tell me where it is."

A woman. A real flesh-and-blood woman on the other end of the phone. She's not just in my head.

A wave of panic spreads under my skin like ice water. It's Colleen.

"Laurin knows how to ratchet up the suspense." -- Publishers Weekly

Nina Laurin studied Creative Writing at Concordia University in Montreal, where she currently lives. She arrived there when she was just twelve years old, and she speaks and reads in Russian, French, and English but writes her novels in English. She wrote her first novel while getting her writing degree, and Girl Last Seen was a bestseller a year later in 2017.

Nina is fascinated by the darker side of mundane things, and she's always on the lookout for her next twisted book idea. Learn more at NinaLaurin.com.

"This addicting thriller rachets up the suspense until the very last page."—Woman's World

"Laurin, with her knack for psychological suspense, here portrays the effects of obsession in chilling detail as the facts of Claire's life are revealed. A spine-tingler."
—Booklist

"Laurin knows how to rachet up the suspense."—Publishers Weekly

"The Starter Wife will give you chills thanks to the heart-pounding suspense laid out by author Nina Laurin."—Women.com

"The Starter Wife reminded me of the powerful novel Girl on the Train by Paula Hawkins."—The Missourian

"Nina Laurin's psychological suspense thrill ride will have you ripping through its pages at warp speed..."—PopSugar.com on What My Sister Knew

"Every good thriller has a shocking plot twist. Girl Last Seen has many. Author Nina Laurin's eerie novel will stay with you for days, months, even years to come."—HelloGiggles.com

"A twisty, mind-bending thriller that will keep you on the edge of your seat..."—USAToday.com on What My Sister Knew

"Fast-paced and hard-edged, it is a heart-stopping thriller that had me guessing to the very end."—Heather Gudenkauf, New York Times bestselling author on Girl Last Seen

"The Starter Wife is a page turner and will leave you second guessing everything you thought you knew until the very end."—BookTrib.com