The Black Jersey: A Novel (Hardcover) 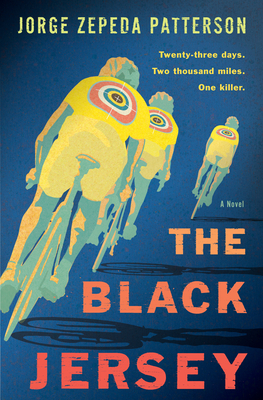 A fast-paced mystery where Murder on the Orient Express meets the Tour de France—someone’s killing off cyclists one by one.

Marc Moreau, a professional cyclist with a military past, is part of a top Tour de France team led by his best friend, an American star favored to win this year’s Tour. But the competition takes a dark turn when racers begin to drop out in a series of violent accidents: a mugging that ends in an ankle being crushed, a nasty bout of food poisoning, and a crash caused by two spectators standing where they shouldn’t. The teams and their entourages retreat into paranoid lockdown even as they must continue racing each day. The mountain inclines grow steeper and the accidents turn deadlier: a suspicious suicide, an exploded trailer, a loose wheel at the edge of a cliff. Marc agrees to help the French police with their investigations from the inside and becomes convinced that the culprit is a cyclist who wants to win at any cost. But as the victim count rises, the number of potential murderers—and potential champions—dwindles.

Marc begins to have the sickening realization that his own team has been most favored by the murderer’s actions, and in the final stages of the race Mark himself emerges as the only cyclist left who could possibly beat his best friend and win the Tour. Whom can Marc trust? Whom should he protect? What decision will he make if he’s asked to choose between justice, loyalty, and glory?

Praise for The Black Jersey

“Men, mountains, machines, speed, greed, and murder . . . Making a tour de force of the Tour de France, Jorge Zepeda Patterson does for cycling what Dick Francis did for horse racing. Warning! Strap on your helmets! This is no tale for wimps.”—Alan Bradley, author of the Flavia de Luce series

“The world of competitive cycling is stressful enough without adding suspicious accidents to the mixture. But that is exactly what happens in this thrilling and intrigue-filled novel. The Black Jersey has the pace and excitement of a world-class race.”—Alexander McCall Smith, author of the No. 1 Ladies’ Detective Agency series

“The Black Jersey is a joy from start to hair-raising finish line, even for someone like me who prefers a good meal to any kind of competitive sport. Bravo!”—M. L. Longworth, author of the Provençal Mystery series

Jorge Zepeda Patterson is a journalist, novelist, and political analyst. He has been the director of several Mexican newspapers and was the founder of Siglo 21, a groundbreaking publication throughout the 1990s. He currently runs Sinembargo, a leader in Mexican news sites, and writes a weekly column that is published in sixteen different newspapers. His debut novel, Los corroptores, was a finalist for the El Premio Hammett Prize, and his second novel, Milena, won the Planeta Prize. His novels have been translated into more than ten languages.

Achy Obejas has translated the works of Junot Díaz, Rita Indiana, Wendy Guerra, and many others. She’s the author of The Tower of Antilles, which was nominated for the PEN/Faulkner Award, the PEN Open Book Award, and several other honors. Her other books include Days of Awe and Ruins.

“Although the amateur bicyclists I know are generally nice people, the professionals depicted in this thriller about murder and mayhem at the Tour de France are anything but. . . . Does Patterson’s shocker of a denouement inspire hope for the future of professional bike racing? Hardly.”—The Washington Post

“During the summer my husband often rides in a 50-mile bike race in the Northwoods. Riding that distance never appealed to me. If I’m going 50 miles, it’s in a car with said husband driving, snacks and a book on my lap.
But I got such an adrenaline rush from reading Jorge Zepeda Patterson’s thriller The Black Jersey, about a murderer stalking the Tour de France, that I biked around Tosa yesterday.”—Milwaukee Journal Sentinel

“[The] ability to satisfy multiple audiences while presenting something fresh makes The Black Jersey a definite winner. . . . Adventure and mystery fans of many stripes . . . cycling fans, of course . . . and anyone who just likes a good story with solid characters and intense human drama will enjoy it.”—New York Journal of Books

“Set during the Tour de France, this thrilling mystery from Mexican author Patterson boasts as many twists and turns as the treacherous bicycle race that winds through the Alps and the Pyrenees. . . . This meticulously plotted novel about riders willing to die—and possibly kill—to win cycling’s biggest race will have readers guessing until the very last page. Patterson should win a wider American audience with this outing.”—Publishers Weekly

“A brilliant and devious criminal turns the Tour de France into a life-or-death race. . . . Patterson offers complex character portraits, a dramatic depiction of the Tour de France, and a nifty whodunit.”—Kirkus Reviews

“The fast pace and numerous plot twists will keep readers in suspense until the end, when the cyclists cross the finish line at the Champs-Élysées.”—Booklist

“For fans of Le Tour, Jorge Zepeda Patterson has crafted the perfect mystery novel, and for all mystery fans he opens up the fascinating and ferocious world of bike racing. The Black Jersey is a feat of storytelling, as fast-paced as any stage of the Tour de France, and with an ending ten times more unpredictable and exciting.”—Mark Pryor, author of the Hugo Marston mystery novels

“Jorge Zepeda Patterson writes with true storytelling gusto. Whether you own a bike or not, The Black Jersey will pull you into the fascinating, hermetic world of professional cycling and keep you out of breath to the very end. Highly recommended!”—Charles Todd, author of the Inspector Ian Rutledge and Bess Crawford Mysteries