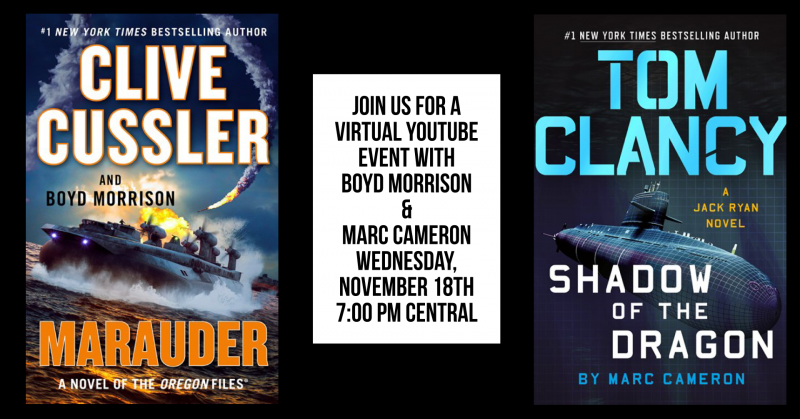 A native of Texas, Marc Cameron spent almost thirty years in law enforcement. He served as a uniformed police officer, mounted (horse patrol) officer, SWAT officer, and a U.S. Marshal. Cameron is conversant in Japanese, and travels extensively researching his New York Times-bestselling Jericho Quinn novels. Cameron's books have been nominated for both the Barry Award and the Thriller Award.

Most of our events can be watched live on the Murder By The Book YouTube page, which can be found HERE.

When it’s time for the event to begin, you should be able to refresh the page until the live video shows up as a new post. Or, if you've subscribed to our channel you'll get a notification when we go live.

If you miss the beginning of the talk, as soon as it wraps up you can find it on our YOUTUBE CHANNEL to watch from the beginning.

A missing Chinese scientist, unexplained noises emanating from under the Arctic ice, and a possible mole in American intelligence are just some of the problems that plague President Jack Ryan in the latest entry in Tom Clancy's #1 New York Times bestselling series.

As President of the United States, Jack Ryan has faced many challenges, but none have been as personal as this and never has he been this helpless in the face of evil in the latest entry in Tom Clancy's #1 New York Times bestselling series.

It is up to Juan Cabrillo and the crew of his ship, the Oregon, to stop a terrorist plot to release a deadly chemical weapon across the globe in the explosive new novel in Clive Cussler's #1 New York Times bestselling series.

Juan Cabrillo fights the worst enemy from his past to the terrifying and unexpected ending in the latest action-packed thriller in the #1 New York Times-bestselling series created by the Grand Master of Adventure, Clive Cussler.