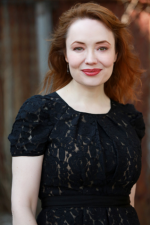 Hilary Davidson is the author of the Anthony Award–winning Lily Moore series (The Damage Done, The Next One to Fall, and Evil in All Its Disguises), the hard-boiled thriller Blood Always Tells,
and her newest novel, One Small Sacrifice, which Thomas & Mercer will publish in June 2019.

Her books have received fervent praise from critics, fellow writers, and mystery fans for their “devilishly good plot twists” (Crimespree magazine) and “smoothly sinister characters” (Publishers Weekly) that always manage “to surprise as well as thrill” (Quill & Quire). Davidson’s short fiction has won the Anthony Award, the Derringer Award, and the Spinetingler Award, and her stories
have been published in Ellery Queen Mystery Magazine, Thuglit, Beat to a Pulp, and Crimespree, among other dark places, and in many anthologies, including Florida Happens (the 2018 Bouchercon collection), Passport to Murder (the 2017 Bouchercon collection), and the upcoming At Home in the Dark, edited by Lawrence Block.

A Toronto-born travel journalist who has lived in New York City since October 2001, Davidson is also the author of eighteen nonfiction books (seventeen for Frommer’s Travel Guides) and articles
for wide array of publications including Discover, Martha Stewart Weddings, American Archaeology, Chatelaine, and CNN Travel.