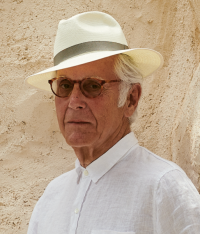 Jeff is an American living on the Aegean Greek Island of Mykonos. A Pittsburgh native and former Wall Street lawyer, he left his career as a name partner in his own New York City law firm to write mystery-thrillers that tell more than just a fast-paced story. His Chief Inspector Andreas Kaldis novels are aimed at exploring serious societal issues
confronting modern day Greece and the world at large, while touching upon Greece’s ancient roots. The New York Times Book Review picked Jeff as Greece’s thriller novelist
of record, and the Greek Government named him as one of six authors—and the only American—writing mysteries that serve as a guide to Greece. He’s received Lefty and
Barry “Best Novel” award nominations, served as Chair of Bouchercon World Mystery Convention and as adjunct professor of English at Washington &amp; Jefferson College, teaching mystery writing.

Jeff blogs about Greece every Saturday on www.murderiseverywhere.blogspot.com and can be reached at www.jeffreysiger.com, on Facebook @jeffrey siger, and on Instagram at jeffrey_siger

Best Books of 2018 in Crime Fiction by Library Journal

When a young demonstrator is publicly singled out and assassinated by highly trained killers in the heart of protest-charged Athens, Chief Inspector Andreas Kaldis is convinced the killing was meant not to take out a target, but as a message. A message from whom? To whom? And why?

Delphi once stood at the center of the world, a mountainous, verdant home to the gods, where kings and warriors journeyed to hear its Oracle speak. The Oracle embodied the decree of the gods--or at least the word of Apollo. To disobey risked...everything.

Did the warriors of ancient Sparta simply vanish without a trace along with their city, or did they find sanctuary at the tip of the mountainous Peloponnese? That stark, unforgiving region's roots today run deep with a history of pirates, highwaymen, and neighbors ferociously repelling any foreigner foolishly bent on occupying this part of Greece.

Mykonos holds tight to its past even as it transforms from an obscure, impoverished Aegean island into a tourist mecca and summertime playground for the world's rich, a process making the Mykonian people some of the wealthiest in Greece. Yes, the old guard is still a force to be reckoned with despite the new money.

In an isolated olive grove on the Aegean island of Tinos lies the remains of two charred bodies chained together amid pieces of an incinerated Greek flag. An enraged press screams out for justice for the unknown victims, until the dead are identified as Gypsies. Then the story simply dies. Is it a Gypsy clan war, a hate crime, or something else?

Saint John wrote the apocalyptic Book of Revelation over 1900 years ago in a cave on Greece's eastern Aegean island of Patmos.

When the body of a boy from one of Greece's most prominent families turns up in a dumpster in one of Athens' worst neighborhoods, Chief Inspector Andreas Kaldis of the Greek Police's Special Crimes Division is certain there's a message in the murder. But who sent it and why?