Sally Woods at Murder By The Book since 2011 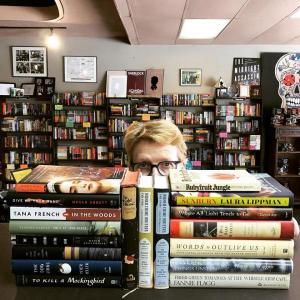 I read a bit of everything, so I've tried to include both old and new favorites. That said, my favorite genre is dystopian. Though,sometimes I think I read too much of it as I can get obsessed. Two of my favs are in this stack. ( I had to stop watching The Walking Dead when I started becoming too aware of my surroundings and looking for escape routes.)

Other favorite authors are Kevin Brockmeier, whose writing makes me happy, and Marianne Wiggins whose Evidence of Things Unseen is possibly my favorite book of all time.

Mystery wise, Tana French has a wonderful Irish series. I always look forward to anything by Laura Lippman and Megan Abbott. I'm trying to catch up on women crime writers from the 40's and 50's, the collection here is incredible. David Joy. His writing will stop you in your tracks with its beauty.

In no particular in order

Chasing the Boogeyman by Richard Chizmar
Billy Summers by Stephen King
State of Terror by Hillary Rodham Clinton and Louise Penny
Falling by T.J. Newman
The Guide by Peter Heller
We Begin at the End by Chris Whittaker
The Hunting Wives by May Cobb
Where They Wait by Scott Carson
The Rovers by Richard Lange
The Anomaly by Herve Le Tellier

Late to the Party Read:

The House in the Cerulean Sea by T.J.  Klune

Check out Sally's Recommendations Playlist on the MBTB YouTube channel.

Chasing the Boogeyman: A Novel (Hardcover)

Chasing the Boogeyman is an absolutely fascinating and creepy read. It's a novel written as non-fiction true crime book.

Richard plays himself in the book and a recent graduate returning to his hometown to get his writing career started.  Young girls are starting to disappear. The rumors are rampant about who or what is responsible.

As one girl after another go missing and the bodies are discovered, Richard decides to write about what is happening.  Richard gets involved and it all starts to get personal.

Chasing the Boogeyman is an amazing blend of horror, memoir and true crime. I had to constantly remind myself this is a novel. A simply excellent work of fiction. I loved it. - Sally

Stephen King's latest is a story about a professional hit-man who decides the job he has just taken will be his last.  It's time to retire. That's when things things start to go a bit awry.

But, as you might expect from King, there's no horror or supernatural elements in this story.  It's a straightforward crime novel about a man whose life has suddenly taken an unexpected turn or two or three.

I loved "Billy Summers".  Billy is simply a good guy trying to right some wrongs in an unconventional job.

Stephen King has written an outstanding story. It's excellent - one of his best.  There's a wonderful cast of characters, both good and bad.  You won't forget them or Billy Summers anytime soon.

Highest recommendation! (Do keep an eye out for easter eggs!) - Sally

State of Terror: A Novel (Hardcover)

Named one of the most anticipated novels of the season by People, Associated Press, Time, Los Angeles Times, Parade, St.

The Guide: A novel (Hardcover)

The best-selling author of The River returns with a heart-racing thriller about a young man who is hired by an elite fishing lodge in Colorado, where he uncovers a plot of shocking menace amid the natural beauty of sun-drenched streams and forests.

We Begin at the End (Hardcover)

A Book of the Month Club Selection

Where They Wait: A Novel (Hardcover)

“Where They Wait is so readable, you’ll be a couple of hundred pages in before you realize you’re terrified…and then you can’t put it down.

Summer, 1976. Jesse and his brother, Edgar, are on the road in search of victims.

The Anomaly: A Novel (Paperback)

The House in the Cerulean Sea (Paperback)

A NEW YORK TIMES, USA TODAY, and WASHINGTON POST BESTSELLER!
A 2021 Alex Award winner!
The 2021 RUSA Reading List: Fantasy Winner!
An Indie Next Pick!
One of Publishers Weekly's "Most Anticipated Books of Spring 2020"
One of Book Riot’s “20 Must-Read Feel-Good Fantasies”