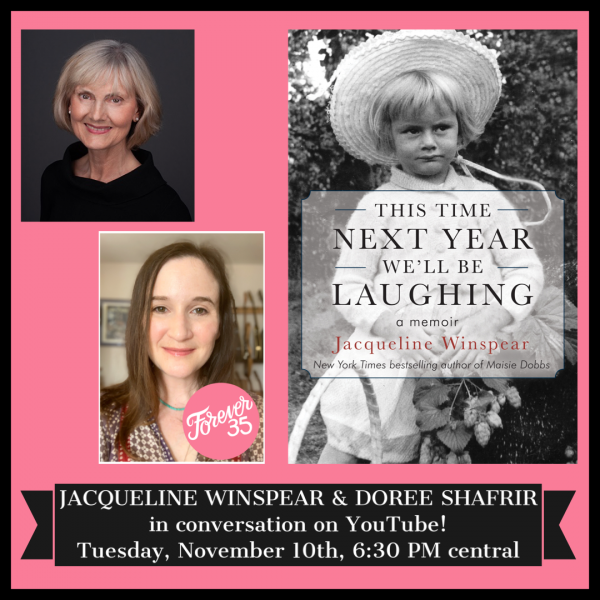 Jacqueline Winspear was born and raised in Kent, England. After graduating from the University of London's Institute of Education, she worked in academic publishing, higher education, and marketing communications. She emigrated to the United States in 1990. She has written fifteen novels in the New York Times bestselling Maisie Dobbs series, which has won numerous awards, including the Agatha, Macavity, and Alex. Her standalone novel about the Great War, The Care and Management of Lies, was a finalist for the Dayton Literary Peace Prize. She lives in California.

Doree Shafrir is a writer and podcaster. Her first novel, Startup, was published by Little, Brown in 2017. She co-hosts the Forever 35 podcast, and the Matt and Doree's Eggcellent Adventure podcast with her husband. She is a former senior writer for BuzzFeed News and has also worked as an editor or staff writer at Rolling Stone, the New York Observer, Gawker, and Philadelphia Weekly, and has contributed to publications including the New York Times, The New Yorker, Slate, and Wired.

She lives in LA with her husband, son, and dog.

Most of our events can be watched live on the Murder By The Book YouTube page, which can be found HERE.

When it’s time for the event to begin, you should be able to refresh the page until the live video shows up as a new post. Or, if you've subscribed to our channel you'll get a notification when we go live.

If you miss the beginning of the talk, as soon as it wraps up you can find it on our YOUTUBE CHANNEL to watch from the beginning.

This Time Next Year We'll Be Laughing (Hardcover)

“Jacqueline Winspear has created a memoir of her English childhood that is every bit as engaging as her Maisie Dobbs novels, just as rich in character and detail, history and humanity. Her writing is lovely, elegant and welcoming.”—Anne Lamott